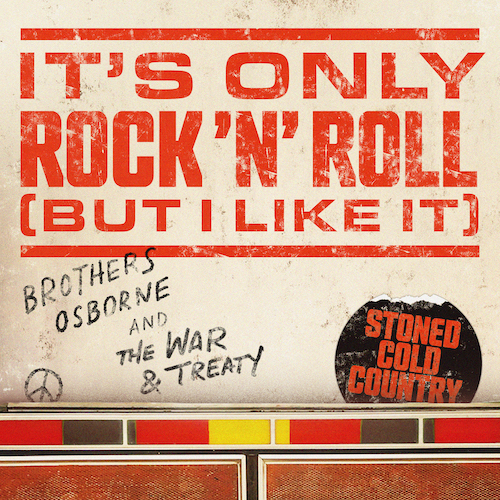 Brothers Osborne & The War And Treaty To Perform Track Live For First Time Together at “The 56th Annual CMA Awards” on Wednesday, November 9

Today, the first taste of Stoned Cold Country – a forthcoming 60th anniversary tribute album to The Rolling Stones from some of country music’s biggest names – arrives with the release of Brothers Osborne & The War And Treaty‘s soulful rendition of ‘It’s Only Rock ‘N’ Roll (But I Like It)‘.

Intertwining old school Rock ‘N’ Roll guitar parts with powerhouse vocals, the track takes a Country spin on The Rolling Stones’ hit song, which was originally released in July 1974 as the lead single of their October 1974 album It’s Only Rock ‘N’ Roll. A music video will be released at a later date.

Brothers Osborne & The War And Treaty will hit the stage live at The 56th Annual CMA Awards on Wednesday, November 9 (airing on 18/11 on BBC Four) for a not-to-be-missed debut broadcast performance of the collaboration. Brothers Osborne are the reigning CMA Vocal Duo of the Year and nominated again in that category this year, while the performance of ‘It’s Only Rock ‘N’ Roll (But I Like It)’ will mark The War And Treaty’s first time on the show.

“We couldn’t be more honored to take part in such a unique tribute to, not only one of music’s most influential trailblazers, but one of our favorite bands of all time,” shared Brothers Osborne. “And to top it off, we get to enjoy the spoils with two of our favorite people and fellow Marylanders, The War And Treaty. We adore them both.”

“It is such an honor to be part of a tribute to one of our favorite bands of all time and to share this moment with Brothers Osborne makes it that much more special,” said Michael Trotter Jr. of The War And Treaty. “We cannot wait to share the stage with them next week at the CMA Awards and we are looking forward to hearing what fans think of our take on the song.”

Stoned Cold Country will be released in 2023 on BMG, filled to the brim with reimagined versions of the legendary rock band’s catalogue. Throughout the record, which was produced by Robert Deaton, the participating artists – Jimmie Allen, Brooks & Dunn, Brothers Osborne, Eric Church, Steve Earle, Elle King, Marcus King, Little Big Town, Ashley McBryde, Maren Morris, Elvie Shane, Koe Wetzel, The War And Treaty, Lainey Wilson & Zac Brown Band – all inject their own trademark style into the revered music of The Stones across Stoned Cold Country, creating a powerful homage to one of the most enduring, trailblazing and influential bands in the world.

“This album is Country Music’s thank you to The Rolling Stones for 60 years of inspiration and providing the soundtrack of our lives. While recording the record, I was reminded that this is a showcase and spotlight on the best we have to offer as a genre,” Deaton says of the project. “From our artists to all of the musicians that played on the record, we boldly state that Country Music is second to none when it comes to artists of integrity and creativity.”