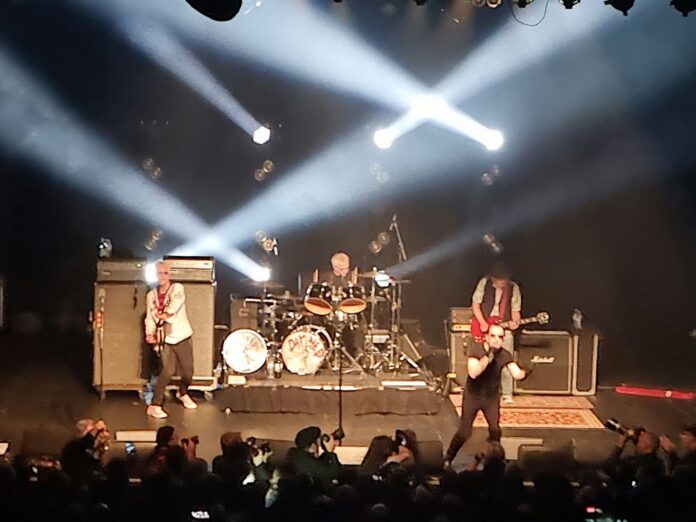 On a night that celebrated the very birth of punk, it was perhaps fitting that the first band on were not born when the single we’ll hear later was released. Smalltown Tigers presence on the bill is an example of the torch being passed, but also the far reaching power of this music. From Italy, and with 20 minutes to impress, the three piece do that, and do it like consummate, seasoned pros – not a band with an eight track mini album. There’s a bubble-gum air to “Runaway Gal”, a relentless energy to “Just Friends” and by the time they’ve done “Darling Please” you are left looking for an analogy that doesn’t involve The Go-go’s sniffing glue out the back while Suzi Quatro looks on approvingly. No excess fat whatsoever, lean and ready to attack for all they’re worth, their “Five Things” album hinted at how good they could be, before the pandemic stalled them a bit. Listening to the title track and seeing the fun they’re having playing on stages before genuine legends, there’s no reason to suspect that Smalltown Tigers won’t be making a really big statement in the future – there’s even a new track “Crush On You” as if to emphasise it. There’s always something so well balanced about a great three-piece and this proves it once again.

“This is for all those of you who still believe” reasons TV Smith as he begins his set tonight. MV has seen Smith so much over the years that he’s probably got a restraining order out at this point (he’s Stiff Little Fingers opening act of choice) but we’ve not seen him like this. Usually he’s attacking his acoustic like it owes him money, tonight, he’s got a band with him, and The Bored Teenagers are here to rip through a set of The Adverts tunes. “This is for all of you who still feel 21!” he exclaims, and sets about proving for half an hour, age is an attitude. “No Time To Be 21” and “Safety In Numbers” come at you in a blur of sneers, and the fact that Smith appears to be having a fine time brings a smile. His dancing on “On Wheels” alone is worth the ticket. “Bombsite Boy” is a highlight and “Great British Mistake” (which one? You might cynically ask these days) works superbly, before the pair that Smith always does solo, “Gary Gilmore’s Eyes” couldn’t sound more like it’s from 1977, and “One Chord Wonders” is the maelstrom it always is. TV Smith might not be a young man anymore, but with The Bored Teenagers, he rolled back the years and is an Adverts for how good the sound still is, you might say.

MV last saw Pauline Murray, give or take one day, six years ago. She was playing solo, and she’d played “Don’t Dictate”, a Penetration song back then. The band is playing it tonight and they do so after “Silent Community” a sort of dark, post punk track. There’s nothing “post” anything about “….Dictate”, though, and it almost dares you to take them on. Indeed Murray might well be up for the ruck. Earlier in the set, they’d played a cover of Patti Smith’s “Freemoney” and its brooding, dark tones seem to sum up the band. “Come Into The Open” one of their singles from back in 1979 still sounds as fresh as you like, and its perhaps telling that they choose to end with “The Beat Goes On” from their 2015 comeback record, as if to show this is not just “Nostalgia” (they’d began their set with that Buzzcocks cover). Murray isn’t happy with the length of the set either (“we’ll see you again with a longer show”) but only because, you imagine she was rather enjoying fronting a punk band again. She’s rather good at it.

The Damned have just come out for the encore and Dave Vanian reckons “you are going to hear one of the finest intros of all time, written by Mr. Brian James and played by Mr. Rat Scabies.” With that they launch into “New Rose” and Birmingham goes schizo.

The first punk single ever released, but did I know that when I heard it for the first time on a Guns N Roses covers record? No. I didn’t, but I did know, at 16 that it was great.

Those two names that Vanian talked about when he introduced the song are incredibly important as well. Their presence on this stage means the original The Damned line up is back together and, nostalgia, mate? We’re wallowing in it.

Right back at the start, Captain Sensible reckons “we’ve got a time machine to 1976” and for the next 75 minutes that’s the default.

Credit to them for not just turning up and playing the debut album in order, instead the set is planned out properly and “1970” by The Stooges or “I Feel Alright” as these boys call it, is the starting gun. That’s one of two covers they play early on, “Help” by The Beatles (“it goes out to Paul McCartney, he lent me his bass….” Offers Sensible), also appears, but their own, mostly James penned early stuff is dusted off and sounds particularly good.

“Born To Kill” thunders, but the selection of stuff they do from their second album like “Stretcher Case Baby” is impressive too. A fact that Sensible acknowledges by adding “they sound better live, don’t they?”

Indeed the songs just keep coming “1 Of The 2” has always been superb and is so here, “Problem Child” (“its not very PC” reckons Vanian) and “Neat Neat Neat” – it was Lemmy’s favourite Damned material, apparently apt, because the first time I saw the band was opening for Motorhead – before the dumb anthem “Sick Of Being Sick”, which Sensible yells is “the best song ever”. That’s an opinion…..

“You Know” features a mighty sax solo from Mike Smith, which is extremely well played, and actually the band are better musicians than they might get credit for as a whole. Scabies is a fine drummer and even though James has to be helped onto the stage his playing is first class.

“So Messed Up” gets us to the encore, which is where we came in, with the punk single. After that there’s “Pills” and another episode of the joy of sax, so to speak, and “The Last Time” by The Stones. That line “will it be the last time? I don’t know”, hangs heavy in the air. It probably will be for this line up, but this time was fun for sure. A fact that Sensible underlined by smashing his bass to pieces and going proper old school at the end.

The last word, though, (and forgive the ultra-personal ending it just seems to fit), must go to the lady who works at the Academy who was working on the Accessibility lift tonight. As she took me down after the show, she said: “I’ll be honest, I’d never heard of them, they just told me they were a band from the 70s.” She then delivered the line that must sum this evening up best of all: “I thought it would be gentle. Then I looked out at the crowd. I never expected that……!”

Punk rock 2022. Still has the ability to surprise and scare the unsuspecting public. I imagine The Damned will be proud.