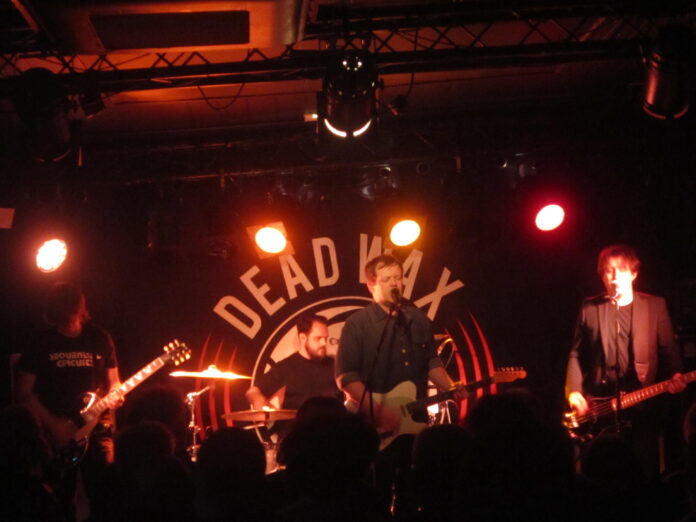 Mean, moody and magnificent is probably a good way to sum up tonight`s show by Northern powerhouse post punks IST IST. This show was sold out when first scheduled for March but a freezing night and the onset of this new Omicron strain of the virus has punched a few holes in the audience tonight. The quartet take to the stage and head straight into a couple of tracks from their debut album `Architecture` with the quite dark and dystopian `Wolves` and the more thumping possessive `You`re Mine`.

A mixture of old and new follows with the eerie `A New Love Song`, rockier `If It Tastes Like Wine`, captivating `Watching You Watching Me` and remote `Middle Distance`.

Singer Adam Houghton breaks a string and has to pass through the audience to retrieve his other guitar before the band share a few bars of local legends Black Sabbath`s `Paranoid` and `Iron Man` before heading into the stirring `The Waves`.

The mesmerising `Black` and enthralling `Listening Through The Walls` takes us into the home stretch along with the quite pulsating and hypnotic `It Stops Where It Starts`.

The delicate `Heads On Spikes` silences the crowd before the flowing `Extreme Greed` gets an airing and the band leave us with the ethereal `Slowly We Escape` which does burst into life midway through.

It seemed quite apparent that the band were delighted to be back on the road and able to deliver tracks from both albums as the pandemic really put paid to the group`s opportunity to play either album in a live setting. A cracking show to warm you up on a cold Winter`s evening. The guys have a few more dates around the UK, catch them if you can as if there`s any justice they`ll be gracing much larger venues next time round.