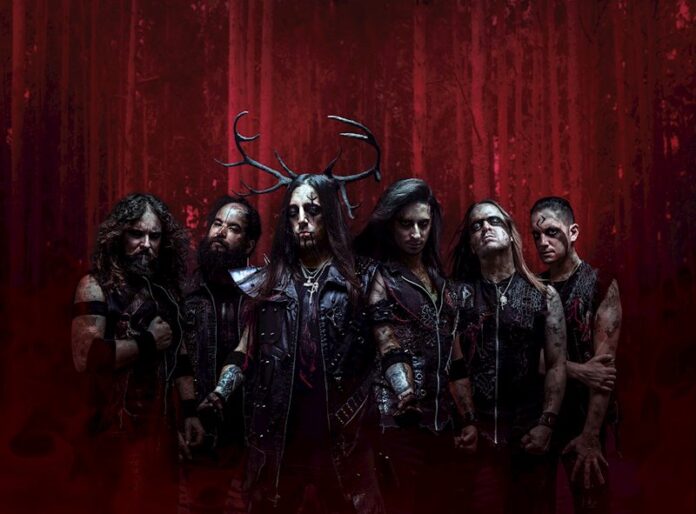 Check out the video here: https://www.youtube.com/watch?v=Cdq3ArS8A4o

and shares first album single & music video!
A return to fantasy: On April 28, 2023, Elvenking will continue their epic quest with “Reader Of The Runes – Rapture”, the sequel to their 2019 blockbuster record “Reader of the Runes – Divination”! Forging a potent magic stronger than ever by evoking the essence of heavy metal, pagan metal, folk and melodic death metal, Elvenking set sail to horizons more distant than ever before, boldly taking the world by storm with their quintessentially unique approach to heavy, powerful music. Today, the band has shared a music video for first single, the album title track “Rapture”.

“After three years of absence, we decided to give our fans a taste of the album that could be as plenty as possible.” Guitarist Aydan and vocalist Damna comment. “Rapture” is one of the longest tracks of the lot and we feel it has all the epicness, the tragic nature and most of the nuances that the album incorporates in its entire length, so this is what we wanted to offer to our listeners as a first glimpse of “Reader of the Runes – Rapture”. Also, lyrically it is the perfect link between the previous chapter and this one, as it is the Introduction. The story opens on the Reader of the Runes himself and we read about his mindset and plans before the climax that will be described in the rest of the songs.”

Ever since their inception in 1997, the band mastered their way to their own identity with courage and bravado, leaving behind the shackles of genres step by step before they truly broke out with their 2014 monument “The Pagan Manifesto”. For four albums now, Elvenking have been defying all genres, feeling quite at home in their very own enchanted realm. With “Rapture”, the Italian collective delivers part two of their monumental “Reader of the Runes” trilogy, and an epic metal quest of woe and despair, wrought with mysterious figures, dark magic and an altogether mesmerizing autumnal flair reminiscent of a forest glade during Indian Summer. It’s more than just a metal album. It’s a moving story set to fabulous songs, bridging the gap between fantasy and reality. Many times before, Elvenking have weaved powerful magic into the world. This time, they truly came into their own, wresting their best effort yet from a global pandemic.

“Reader Of The Runes – Rapture” was written between 2020 and 2022, and was recorded between May and October 2022 by the band and renowned producer Scott Atkins (Cradle of Filth, Behemoth) who also took over mixing and mastering duties.

“How would we have approached musically the second chapter of the “Reader of the Runes” trilogy? That’s a question we asked ourselves many times before finalizing the songwriting process.” Damna and Aydan explain. “Working both on ROTR Part 2 and Part 3 at the same time, really helped us spread the songs, the lyrics and the atmospheres on the whole remaining part of the story as the development of the events needed a strong backing from the music. So, Part 2 is indeed darker, it needed to be tragic and violent and this gave us the chance to fully breathe the soundscape we already had in mind as we started to write songs in early 2020. We feel that with this album we have cast a milestone and set a further limit in what we can do by mixing wisely what we deeply love in metal. We are very satisfied with all the shades that compose these eleven songs; altogether they make a canvas we are very proud of. Part 3 instead will explore the disclosure of all the mysteries narrated in the first two chapters and for this very reason you’ll have to expect even further  different musical nuances in the future of this trilogy.”

Slated for a release on April 28, 2023 via AFM Records, the album pre-sale has just started at THIS LOCATION!