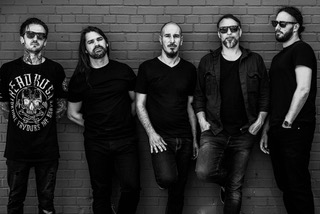 Having set the scene for their forthcoming album Meanwhile with the release of the first single, Within Reach, which showcasedKlone’s signature blend of beautiful soundscapes, monstrous riffs and off-kilter time signatures, blended with relatable lyrics, they have invited the listener to take another step on their sensory journey with the release of “Bystander”

WATCH THE VIDEO FOR “BYSTANDER” HERE

The band comment “Bystander” is an introspection on our relationship with death and mourning, and its acceptance. A kind of parenthesis on our passage in this life. Through this dreamlike and totally immersive soundscape, with heady melodies and heightened emotion, “Bystander” is a subtle blend of sensitivity and intensity.”

With the release of their new album Meanwhile on 10th February on Kscope, the emotive and conceptual, Klone, have once again broken new sonic ground and built further on their signature expansive sound.

Since 2019’s opus Le Grand Voyage, French art-rockers Klone have risen to new heights across the globe, touring alongside the likes of Leprous and Pain of Salvation, and blowing away festival crowds at Hellfest, Motocultor, Prog Power USA, Midsummer Prog, and Cruise to the Edge. Back with new album Meanwhile, the band return with sprawling textures, huge guitars and beautiful melodies to satisfy progressive metal fans and rock listeners alike.

Recorded in February 2022 with producer Chris Edrich (TesseracT, Leprous, The Ocean Collective), Meanwhile chronicles the best and worst aspects of humanity. Vocalist Yann Ligner’s high-concept and oftentimes meta lyrics paint a picture of events taking place at the same time but in different places, while he muses about choices that are made against our will that can change the course of our common history – resulting in some poignant reflections about today’s world.

The striking artwork for Meanwhile was created by Umut Recber, who experimented with photo manipulation techniques to create a striking image of stormy skies which perfectly represents the music within.

Klone have confirmed they will be supporting the release of Meanwhile with live shows, beginning in their native France, but more dates will be announced soon.