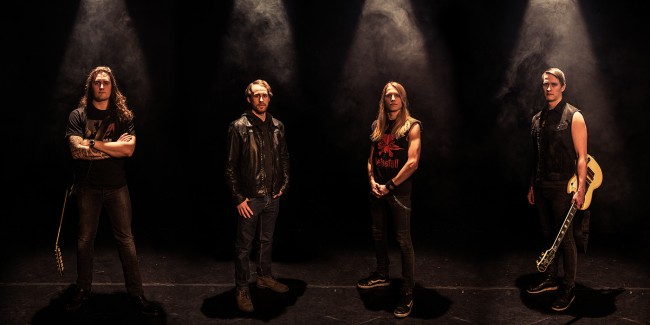 Inkvisitor is a four-piece thrash metal band originating from Jyväskylä, Finland. The band was formed in August 2012 by Jesse Kämäräinen and Lauri Huttunen after Jesse posted an add about forming a band. Together they agreed that thrash metal would be the genre and the two managed to form Inkvisitor’s first line-up with two additional musicians. The line-up was short-lived and quickly replaced by Petteri Milan on drums and Petteri Huikkonen on bass. Aapo Vuori was last to join the band during spring 2013.

The band spent the summer composing and rehearsing new songs and in Fall performed their first live shows. In December 2013 the band entered to studio to record their first release, Delirious Tales EP. The EP was released in April 2014 and was met with positive reviews and reception. For example the Finnish metal magazine Inferno picked the EP as the Best of Month in May. The band toured in May and in summer 2014 started to write and rehearse new material. During Fall 2014 the band will tour and then enter the studio to record their first full length album.

The band toured in May and in summer 2014 started to write and rehearse new material. During Fall 2014 the band completed tour in Finland dubbed Mobile Shredding Unit Tour and it consisted of 10 gigs.

After the tour bassist Petteri Huikkonen informed that he’ll be pursuing other activities than music and therefore quits the band. He cited lack of time to be the main reason for his decision. The band started to look for an replacement.

In December 2014 the band won competition organized by Tuska Open Air Metal Festival to play with Lost Society at Tavastia, Helsinki and completed the year by playing at Klubi, Tampere with total of 24 shows in 2014. After a christmas break in January 2015 the band starts to record it’s debut album named Doctrine of Damnation and completes the recordings in February. The album will be released 17.8.2015 and features ten new songs. Due the lack of bassist, Jesse’s old friend Pekka Löhönen plays the bass on the record. Lauri’s and Petteri’s old friend Ville Grekula fills in for the live shows.

Heres Jesse Kämäräinen from the band to tell us all about it: “On the new album we dropped all the booze and party related topics, speeded up the tempos and added more guitar harmonies and melodies compared the previous EP.

“Lyrical topics include problems of modern day society and politics, horror, Greek mythology and depths of the human psyche. What comes to production, we choose to aim for more organic sound with modern standards and thus kept triggering to bare minimum. That being said, no vintage tones either. The album was entirely financed and produced by the band itself.

“The song Damnation was our first single out of the album and we made a music video for it. It’s about apathy, political correctness and corrupt politics of the modern day. nataS ageM is about powers of the nature, universe’s ultimate fate and chaos theory. Abduction at Night is about alien abduction and the horrors it brings. Three Phases of Disembodiment is about three armies clashing and crushing fascism. J-Town Anthem is homage to our hometown; the tune has been played through public PA during summers since 1976. Eine Box (Mobile Shredding Unit) is in German and is about the horrors one endures when facing death by a giant microwave. Nothing to Live For is a mixture of Greek mythology and ponderings about afterlife. Hellbound For Carnal Knowledge is a tribute song to Hellraiser and probably fastest Inkvisitor tune to date.

“It’s also the next single out of the album. Claim What is Yours has again elements from the Greek mythology and is the most epic song on the album. The album will be available in various digital streaming services and the physical copies will be sold on band’s website, Bandcamp and Record Shop X (all ship internationally). The band will tour in Finland during the fall (10 shows and more to come).”