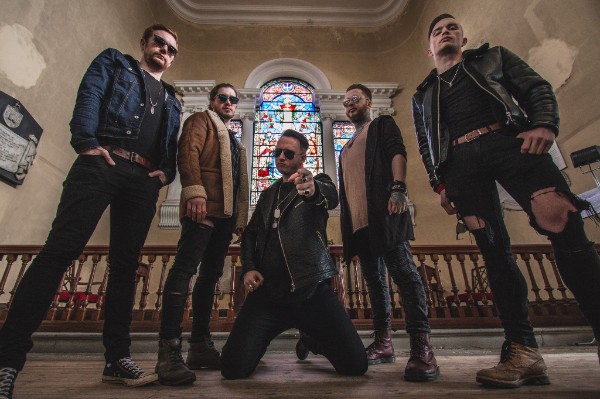 Manchester’s THE NEW BREED announce the release of brand new music in the shape of a new single and video – THE YOUNG AND THE RECKLESS – today on Friday 27 July 2018.

The Young and The Reckless will be available for digital download and streaming from all leading outlets.

The song is accompanied by a stylised lyric video, produced by guitarist, Tom McKay, and released on Fri 27th.

The Young and The Reckless is the first song taken from their forthcoming debut album, recorded at Edge Studios in Cheshire and scheduled for release in early 2019.

Singer, Jay M Ward, explained story behind the song, “The song is a retort to everything that is thrown at us each day; the lack of care for the bad decisions we make; giving up on trying to change things anymore as nobody listens, nobody cares; none of it matters for we are all young and reckless in some way.

He went on, “Its expensive, laying down new songs, so we needed to make the most of our studio time and wanted to include The Young and The Reckless but the vocal melody just wasn’t working. But then the stress and time pressures kicked in and what you hear is the angst driven distain of a bunch of young musicians trying to make their story heard.”

THE NEW BREED are a fresh, talented hard rock n roll 5-piece from Manchester, England; encompassing everything great about the 70s and 80s, whilst driving their sound into a modern era.

Since playing their first gig in late 2015, they have gone from strength to strength within the UK music scene, they signed with TMR Management in January 2018 and are now deep into writing and recording their debut album, ready for release early in 2019.

They have recently completed their first nationwide UK tour as guests to Bonafide.