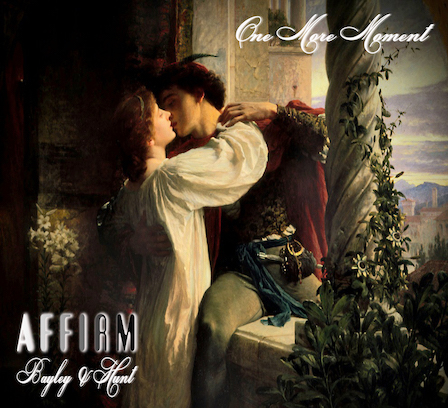 We are pleased to announce that the new original album entitled ´One More Moment´ from AFFIRM (featuring Bayley & Hunt) is now available on CD and as a digital album to download/stream on our official Bandcamp page and other selected digital outlets.
AFFIRM are founder member of the legendary 60s pre-Yes band Mabel Greer’s Toyshop Clive Bayley and multi-instrumentalist/producer Max Hunt. The album also features guest performances from Rita Fabrizio (USA) on Flute, Peter Tesarek (Germany) on lead guitar and Annouchka Bayley (UK) on spoken word.
This album follows on from ´Whispers´ by Bayley and Hunt which was released to critical acclaim in 2020.
Whilst ´One More Moment´ is deeply rooted in the psychedelic & progressive rock of the 60s & 70s, it also strongly embraces elements of contemporary rock/pop, world and film music. Clive and Max have built on the experience gained producing Whispers to create a powerful new album with deeply romantic, emotional and metaphysical themes, powerful orchestration, world music rhythms and the odd surprise.
Production of this album was started in October 2021 and work continued in both the UK and Germany with Clive and Max playing a range of guitars, bass, keyboards and percussion. The album also features extensive vocal arrangements, arranged and performed by Clive and Max.
Clive Bayley is a founder member of the London based 60s pre-Yes band Mabel Greer’s Toyshop. Clive founded the band with Bob Hagger in 1966. Chris Squire was their bass player and, following a period of extreme creativity and line-up changes with Tony Kaye, Bill Bruford and Jon Anderson joining, MGT became Yes in 1968. Clive co-wrote the songs ‘Beyond & Before’ and ‘Sweetness’ which featured on the first Yes Album in 1969