Share
Facebook
Twitter
WhatsApp
Linkedin
Email
Print
Tumblr
Legendary demo gets the re-release treatment this week
As with a choice few truly great bands, the first self-financed cassette recording by Cathedral – made available in October 1990 – was a pioneering underground masterpiece in its own right; the sound  of a young band exploring its new found chemistry, finding confident variations on a flawless list of influences and cultivating a sound and style that would prove hugely inspirational throughout the 1990s and beyond, being a major influence on everyone from Electric Wizard through to Reverend Bizarre.
Where most demos are little more than a dry run for the first album, ‘In Memoriam’ still has its own distinct and important identity in the Cathedral canon. The debut LP that followed, ‘Forest Of Equilibrium’, has a  sombre, devout, melodic and mystical grandeur all of its own – but ‘In Memoriam’ has a far murkier, earthier,
more deathly intent. Creepy, cryptic and bowel-looseningly heavy, it represents the first time that the
doom metal stylings of Trouble, Saint Vitus, Pentagram and Witchfinder General had been rendered in a new, more extreme metallic form.
At the beginning of the new decade, it was really only Cathedral who were proud to assert the influence of
true doom metal – a perennially unfashionable genre, but especially in a turn-of-the-decade metal
scene so obsessed with speed, technicality, brutality and modernity.
*CD edition comes with bonus DVD, featuring a
rare live performance from 1991. Also incudes
booklet with extensive notes and rare photos.
*Vinyl edition comes as a double 180gm LP
set in gatefold sleeve with full sized 8-page
booklet. 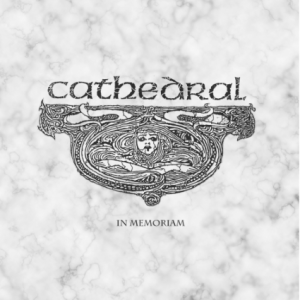