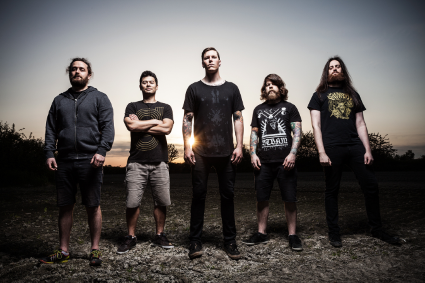 Progressive Canadian heavies NECK OF THE WOODS will release their self-titled debut EP on May 22.  Decibel Magazine wrote that the EP “has no shortage of dual guitar acrobatics, but all in the service of rabid forward momentum, not pointless whack-off noodling. They back a ton of Decibel faves on their Facebook page (BTBAM, Converge, Gojira, DEP, ETID, Misery Signals), and have similar crossover appeal.”

Complex, confrontational, and unflinchingly heavy, NECK OF THE WOODS are the most exciting progressive metal band to emerge from Vancouver, BC’s underground scene in a generation. Spearheaded by guitarists Dave Carr and Travis Hein’s interwoven riffing, Jeff Brown’s intricate drumming, and Jeff Radomsky (a pro skateboarder-turned-frontman who spends as much time in the crowd as on stage), the quartet deliver a punishing and exhilarating experience live and on record.

Having spent the best part of a year locked in rehearsal rooms defining and refining their sound, Neck of the Woods finally surfaced as a polished force, delivering a debut demo containing tracks ‘Left Behind’ and ‘Two Smokes,’ along with a series of shows that immediately created a buzz through their hometown’s metal scene.

This instant acclaim led to Neck of the Woods being selected to represent Vancouver in the Wacken Metal Battle Finals in Toronto. Winning more fans, and narrowly missing the first prize of a slot at the German Festival, gigs alongside bands like Havok, Wretched, Wolves in the Throne Room and The Faceless were their deserved reward.

With the release of their self-titled EP this May, their first tour of Western Canada, and shows at the Calgary and Armstrong Metal Festivals, Neck of the Woods are poised to make another giant leap towards the metal elite.

“When we started this band we decided as a group that this would be our lives,” explains Radomsky. “We had a bunch of shared influences – bands like Opeth, Misery Signals, and Between the Buried and Me – and we knew that if we wanted our songs, tightness and performance to reach those levels we had to work for it. If that meant rehearsing five days a week, then that’s what we had to do. Seeing the responses from crowds proves that it was worth that effort.”