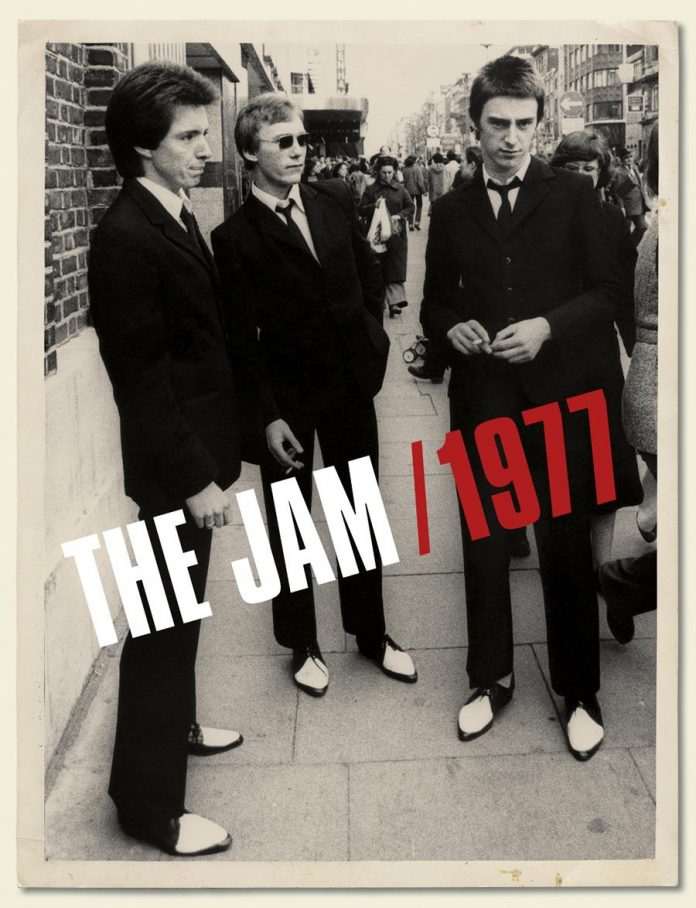 In May 1977, a young 3-piece rock group from Woking in Surrey appeared on Top Of The Pops with an explosive single called In The City.

The song fizzed with the energy and sense of purpose and is one of the most incendiary debut singles ever. At the same time, The Jam released their exhilarating debut album, also called “In The City”, and in the very same year it’s follow up “This Is The Modern World. To celebrate this 40th anniversary USM-Polydor release a five-disc box set featuring both albums re-mastered as well as unreleased demos and live recordings.

The Jam became one of the most popular bands to emerge from the English punk rock scene of ’77 and had a phenomenal impact on pop music and wider youth culture. In their short career, they achieved 18 consecutive Top 40 singles in the UK (including 4 number 1s) and released 6 ground-breaking albums and went on to influence a generation with their music, style, politics and inspiration

Disc 1 – ‘In The City’ – Debut LP from May 1977 – A raw and powerful album that announced the arrival of The Jam, with their 18 year old lead singer Paul Weller sowing the seeds for what the was in store for the future. The Jam’s music at this time owed a lot to the harmonies of Motown, the energy of  Dr Feelgood and early Who but with the anger of the current Punk scene. Although Weller’s band was obviously headed in a different direction, this debut sits alongside the first albums by The Clash and the Sex Pistols as one of the definitive records from the era. The album includes hit single In The City (which gave the band their first Top Of The Pops appearance, included on the DVD), live favourite (and suggested single) Art School and Paul Weller’s most ambitious early song – Away From The Numbers.

Disc 2 – ‘Demos’ includes 11 demos made for the first album – 6 of which are previously unreleased.

Disc 3 – ‘This Is The Modern World’ the follow-up album, released a few months after debut in late 1977, with iconic Gered Mankowitz cover shot. This hastily released follow-up to In The City has long been the topic of debate among Jam fans. It might not be up there with later classics such as All Mod Cons & Sound Affects but time has been very kind to this album. It clearly paved the way for the refined brilliance of the later albums which possibly wouldn’t have happened without it.  Includes the rousing hit single The Modern World and some of Weller’s early introspective gems – Life From A Window and I Need You (For Someone), as well as The Combine, a track that pointed markedly towards the next album All Mod Cons.

Disc 5 – a DVD featuring TV appearances from the likes of Top Of The Pops and So It Goes plus promo videos from 1977. Includes performances of the hit single All Around The World (which did not appear on either LP)

Five LP-style CD wallets with printed inner bags – ‘In The City’ will feature the US version of the LP inner sleeve, also using a Martyn Goddard out-take photo. ‘This Is The Modern World’ will feature an alternative Gered Mankowitz cover image. Also includes five postcards. All housed in a ‘rigid, lift-off lid’ box.