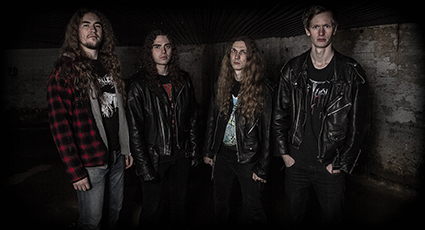 Hailing from Denmark IMPALERS are deeply rooted in the extremity of the German thrash scene from the 80’s, providing powerful and aggressive music blended with melodic passages and breaks. IMPALERS have improved and fine tuned their craft on this new release with lyrical statements of anti-war and anti-theism, they strive to enlighten a path for a better world. In a few words IMPALERS are brutality and melody incarnate. “God From the Machine” should please and satisfy any worshipper of Heavy music and is an absolute no-brainer for Thrash fanatics.

Recording for the new album was completed at Death Island Studio in Denmark (www.death-island.com) with producer Marco Angioni at the helm, while the cover art duties were handled by Pär Olofsson (Exodus, Immortal, Job for a Cowboy).

“God From The Machine” will be available soon for pre orders on the CRIME RECORDS webstore: www.crimerecordsshop.no

Beginning on April 17th IMPALERS will head out on the road in support of the new release, dates and venues can be seen below.

IMPALERS 2013 debut full length album “Power Behind the Throne” is available now on the CRIME RECORDS Webstore and more official merchandise can be purchased directly from the band here: http://impalers.bigcartel.com