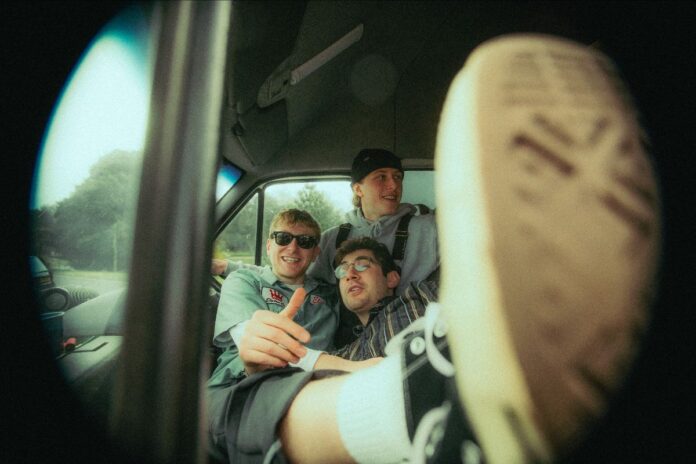 Isle of Wight indie punks Reminders have shared their new video/single, ‘Post Paris Blues’ today before they hit the road in the UK through late March and April.

The track is the latest to be taken from their forthcoming debut album Best of Beach Punk, set for release on 1st April 2022 via Venn Records (UK) and Wiretap Records (USA).

The record is available to preorder now on CD and 12″ vinyl: USA / UK

Commenting on the track, frontman Leo Dyke says: “I wrote this song on the stroke of turning eighteen and it’s about being truly honest with yourself about what you want. I think with social media it is so easy to plug into somebody’s life and compare it to yours and romanticise it. It can be a really dangerous thing to do, but it’s a very easy trap to fall into.

“This song came about because I was unhappy with a girlfriend at the time, and I saw an Instagram post from a girl I used to see and her new boyfriend in Paris. I guess at the time I wished I were him, or at least in their position, and the song recounts some of the fond memories I had with her, whilst feeling a little uncomfortable that it was so long ago, and yet here I am, still thinking about it. I felt as though I was missing out on so much, and I’d love to be in their position, reeling with ‘Post Paris Blues’.

“As a three-piece it can be quite difficult to sound like a full band sometimes. This song makes me want to be in a three-piece forever. With guitar, bass and drums firing on all cylinders like in this song, you really don’t need anything else.”

Reminders approach punk rock from where they know it best: a forgotten seaside town. Formed on the Isle of Wight in 2017, the band cut their teeth writing songs about teenage lust and suburban boredom, gaining attention after they independently released debut single Water Sports and Major Cities. Fresh-faced and excited, the then-teenagers coined their sound ‘beach punk’; a tongue-in-cheek ode to their hometown that they stand by today.

Firmly solidifying their identity as breakneck but bubblegum, a pop-tinged punk band, Reminders work to introduce themselves to anybody willing to listen. After an unexpected hiatus during COVID which delayed the release of their album, the band are now raring and ready to go with their new label homes at Venn and Wiretap and forthcoming tour dates.

Already championed at radio by BBC Radio 1, BBC 6Music and BBC Introducing, as well as landing placements on esteemed Spotify and Apple Music editorial playlists alike, they were labelled ‘scorching slacker pop’ by the influential CLASH Magazine, dubbed ‘About to Break’ by UPSET Magazine, and have already shared stages with rock legends and pop stars Liam Gallagher, The Killers, and Camila Cabello.