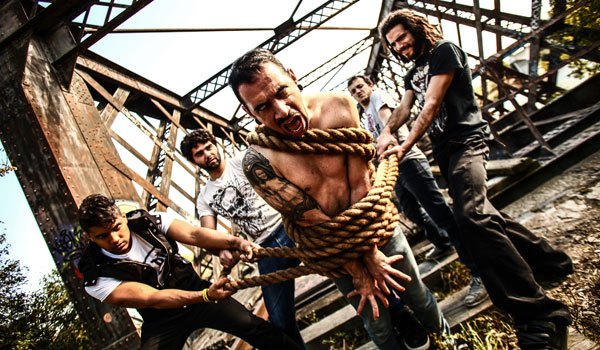 Starting in 2010, Beyond The Styx are a group from Tours, France hammering a sound which they say is too brutal to be labelled hardcore and way too dynamic to be simply defined as metal. The music this young five-piece creates straddles both universes and reference equal parts August Burns Red, Parkway Drive and Lamb of God.

In 2011, the group puts their first material to the test with the recording of their debut demo “ex1le”, which received some encouraging reactions and allowed them to tour throughout France for the first time.
In late 2012, they released their first EP “Sloughing Off The Shades” and have grown a strong fanbase in the months following by wreaking havoc on stage alongside bands like Hacride, Klone and Zuul FX.

Drawing from the experience gained over the past two years, Beyond the Styx enters the studio in the summer of 2014 to record their first full-length album “Leviathanima”, which was released last month via Klonosphere Records.
Powerful, aggressive, diverse and infectious are all buzzwords fit to describe the group’s debut album,  with the bad adding their sound is “a potent combination of punishing hardcore rhythms, furious metallic riffs and brutal vocals that will surely enthral fans of August Burns Red, The Ghost Inside and Parkway Drive.”

Check them out here: