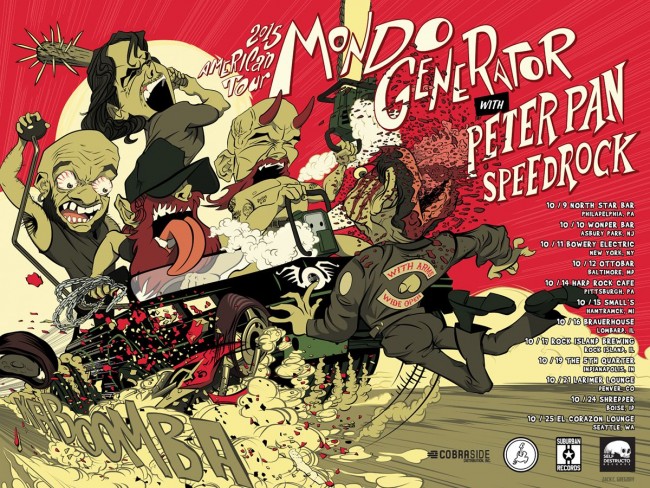 ….and so will you when you see the tour we are gonna miss

High octane powered Dutch machine Peter Pan Speedrock have confirmed and announced a Fall tour in the United States with Los Angeles based punk/metal hybrid Mondo Generator that has the hell ride begin in the city of Brotherly Love and conclude in the Emerald City.

This tour ends a thirteen year long hiatus and a long awaited return of Peter Pan Speedrock to US soil and it is perfect timing for them to do this.  2015 is a significant milestone in their world as they are marking twenty years strong as a band, the ten year anniversary of their Eindhoven based metal/punk festival Speedfest and a North American release of their latest album Buckle Up And Shove It!(first release in North America since 2005). Their success is accredited to a solid foundation, nonstop touring and a work ethic that’s as heavy as the 2015 lineup for Speedfest.

Their latest album Buckle Up And Shove It! was released across Europe by Suburban Records/Steamhammer and picked up earlier this year by Self Destructo Records for North American audiences.  Fourteen powerful tracks that blend crushing metallic guitar, powerful low end bass and hammering drums that were recorded at their new in house recording Mecca Bootleg Studios in Eindhoven, Netherlands.   Their career includes ten full lengths along with split albums with names like Zeke, Danko Jones, Batmobile, Gluecifer, V8 Wankers & Death Alley.  Their workhorse ethic has taken their live shows across the European, Australian and North American continents with their first visit to the Asian continent occurring in wintertime. With this ethic, they draw themselves closer to their goal of surpassing The Ramones number of live shows played of 2,263.

Mondo Generator is celebrating twenty years as a band as well! Reactivated after being put on ice due to Nick Oliveri’s touring/recording commitments with Bl’ast, Moistboyz and Dwarves, as well as releasing his solo album Leave Me Alone (Schnitzel Recordings) with tours across California and Europe in support.  The break also had him rejoining his old band Queens Of The Stone Age on the stage during their final show of 2014 in Los Angeles at The Forum as well as a performance in Portland, OR. This tour will conclude for Mondo Generator at the Day Of The Shred festival in Santa Ana, CA where they will play alongside the likes of Torche, Crowbar, Yawning Man, Saviours, The Body and Nick’s old band mate from the Kyuss years, John Garcia. It will be the US tour for Mondo Generator since they shared the road with Wino and Saviours back in 2013 in support of their last album Hell Comes To Your Heart (Mondo Media/No Balls Records).

Catch the video for the Last Train (feat. Josh Homme) from the Mondo Generator album Hell Comes to Your Heart.

Buckle Up And Shove It! is available now from Self Destructo Records on vinyl and CD in North America and through Suburban Records for the rest of the world.

Leave Me Alone and Hell Comes To Your Heart are available through the Nick Oliveri webstore.