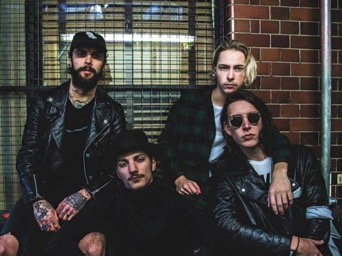 London four-piece The Hunna continue their rapid ascent, announcing their first UK headline tour alongside a set of European dates and a maiden voyage to the States in June to play a headline show at New York’s Mercury Lounge.

Having already sold out three London headline shows in March off the back of their debut track ‘Bonfire’ – with an Electric Ballroom show to follow in June – the band will now be playing the length and breadth of the UK and also venturing into Europe visiting France, Holland, Germany and Belgium.

The Hunna’s current single – ‘We Could Be’ – has notched up over two million video views and reached #15 on Spotify’s UK Viral Top 50 and #22 on the iTunes Alternative Chart. Zane Lowe and Huw Stephens have shown the band strong recent support, giving the track spins on their Beats 1 and BBC Radio 1 shows respectively. The Hunna are also blowing up globally, charting in territories including North America, mainland Europe, Australia and Asia.

Since launching in October, the quartet have amassed an army of followers and seen the videos for both ‘Bonfire’ and its B-side ‘She’s So Casual’ reach over a million views each. And now with ‘We Could Be’ hitting the two million mark, the band’s fan base is growing exponentially, driven by the band’s crusading zeal which is connecting with fans worldwide.