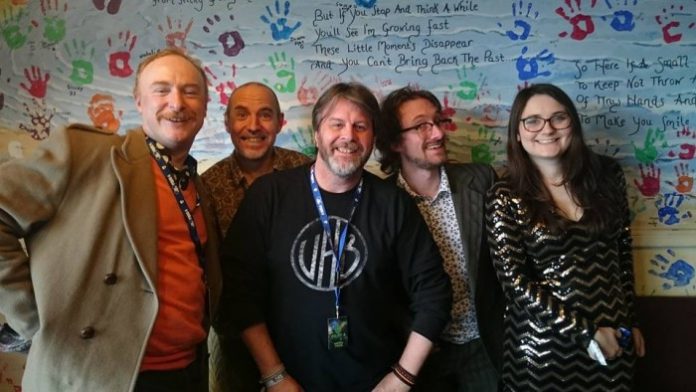 Garry goes to Wales for a Prog weekend

It’s the third weekend in March, the sun is shining…..it must be the HRH Prog Fest in North Wales.

This festival is in its fourth year and each year seems to get the balance of classic, new and eclectic Prog just about right….these holiday camp festivals are big business and it’s easy to see why…..rather than a tent you get to retire at the end of each day to a nice warm comfy bed in one of the many variety of different accommodation around the site…..ours was a brand new all mod cons caravan, and rather nice it was too.
The Thursday evening is more of a warm up to the main event rather than a full blown all dayer….and this years Thursday headliner was The Crazy World Of Arthur Brown….and the best word to describe his set is WOW!!! It was my first experience of Mr Brown & Band….it certainly won’t be my last, the set was a myriad of costume changes, dance routines and a back catalogue to die for, all in all a brilliant way to start the weekend.
First up on the Friday was The Fierce & The Dead…..an instrumental band with a serious kick to them, their set was a sometimes raucous affair but with the talent on show you couldn’t take your eyes off the stage and puts them a world away from the normal and sometimes wishy washy wannabe instrumental bands out there and was a perfect opener to what was an interesting set of acts across the the rest of the day.
The Greek band September Code were a very welcome addition to the bill and a terrific bunch of guys (I interviewed the band earlier in the day for my radio show) who really struggle for airplay in their home country and therefore makes the trip to Wales a real chance to make a name for themselves here in the UK….and from the crowd reaction I would say they have grabbed plenty of extra fans over here.
Purson were added to the bill at the last minute to cover for Curved Air who had to pull out and my word they they really made the most of the evening slot, the new material from the upcoming ”Desires Magic Theatre’ is a real treat and will feature on many a top album of 2016 list, Purson are a wonderful band who take you on a psychedelic bluesy prog trip that takes in all the best elements of Curved Air and Black Crowes and then throw their own signature on it.
The highlight of the Friday for me was without doubt the magnificent Caravan…..a setlist taken from a very rich back catalogue was always going to be lapped up by an audience who like myself had a fair chunk of Caravan in their own collections at home….the songs from the landmark album ‘In The Land Of Grey & Pink’ were the real highlights and Pye Hastings and the guys absolutely nailed track after track…..a great end to a fine day.
Saturday started well with Dubai based band Empty Yard Experiment who treated the audience to a fine set….with some new tracks as well as a handful from the excellent 2014 album ‘Kallisti’….then it was the band I’d been most excited to see…..the wonderfully eclectic Schnauser, I’ve been a fan of the band for a couple of years but this was my first time of seeing them live…..their set was a perfect example to bands of how to thoroughly enjoy playing live, they have new material out later in the year….I urge you to buy the album and then go and see them live….and to make things even better I got to interview them later that afternoon too…..see photo attached.
Messenger are a band who I believe are destined for big things, they brilliantly mix new and old prog & folk in such a way you don’t know what the next track will be like….but you know you want to hear it…the played a wonderful set at HRH Prog Fest and also in Birmingham a few days later…..then late April their new album the brilliant ‘Threnodies’ hits the shelves…..I really hope it does big business for the guys.
Ian Anderson was the late evening pull at HRH Prog and he had been responsible for a lot of ticket sales….I had seen Mr Anderson around 18 months ago when he had another singer onstage to share the vocal duties….this time around it was all down to Ian himself and it was clear from the opening track ‘Living In The Past’ that it was an error in judgement…..the band musically are absolutely top notch but Mr Anderson’s vocal were seriously lacking and I found myself wanting the set to be over much sooner than it was.
The closing act of the whole weekend were the mighty Von Hertzen Brothers….I had my obligatory chat with Mikko beforehand who was concerned as to whether they were ‘headliners or deadliners’…..well 30 seconds into the brilliant ‘New Day Rising’ and a straw poll amongst the crowd there would tell you…..they were headliners!!! It was a brilliant set from VHB consisting of new material, recent tunes and a couple of tracks from the bands breakthrough album ‘Approach’…..these guys are a joy to behold and always deliver….they did too a few days later in Birmingham as well.
HRH Prog Fest 4 is done and dusted…..roll on HRH Prog Fest 5 next year…..I’ll be there….you should too!!!!
(Not all bands on the bill have been covered simply due to the amount of space required to review a three day festival)
Garry Foster:
Unchained: Tuesday’s 10pm-Midnight
Prog Rock Files: Thursday’s 10pm-Midnight
101.8WCR FM & www.wcrfm.com
Previous article
Sharpen The Knifes
Next article
Hell Is Uprising