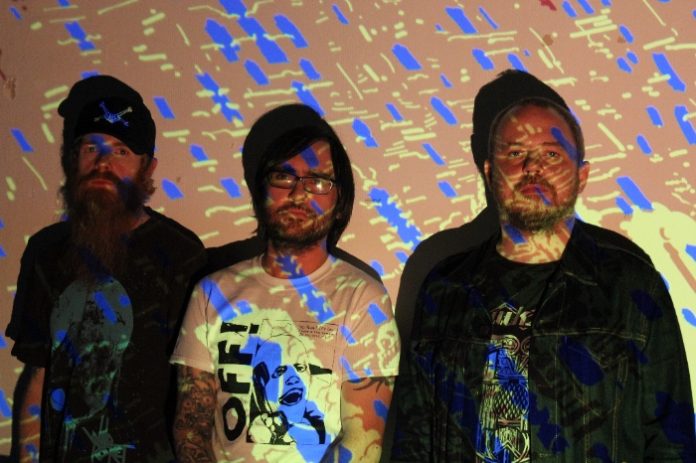 Within the realms of extreme music, there are paths few bands dare to tread, masochistic auditory experiences enjoyed by a select few, feared and misunderstood by many. Glasgow’s HEADLESS KROSSare terrifying, dishing out grim music that’s an exercise in primeval tension and paranoia. Their forthcoming offering Projections I is released on November 18th via At War With False Noise.

Ahead of their release the band have debuted their track …Does Not Equal Time for listening. Check it out here:

and have made their 2015 albumVolumes available for free (grab it here).

Comments Vocalist/Bassist Derek Sexton: “Projections I is the first in a trilogy of albums whose fractured narrative examines this distorted yet strangely cyclical world we live in through equally distorted yet strangely cyclical psychedelic doom. We recorded it as part of a psychogeographical experiment in which we conducted a series of field recordings in various ritualistic areas of Glasgow and we feel we are embracing an increasingly polarised sound – the riffs are heavier, the monolithic groove is catchier, the freak-outs are space-ier and the fragmented lyrics descend into an infinite regress as time seems to collapse in upon itself.”

Recorded and mixed by the band themselves at guitarist Tommy Duffin’s own 16 Ohm Studio in Glasgow and mastered by James Plotkin (Khanate, Isis, Conan, Palms), the result is a menacing album that embodies avant-garde invention and unstoppable aggressive creativity throughout.  Envisaged as the first part of a trilogy, this new record sees HEADLESS KROSS heading toward further extremes – heavy bits are heavier, trance-y bits are tranc-ier, this is a band that has honed its sound to vicious effect. The album’s four songs explore ideas related to projectivism, psychogeography and psychochronography. These growing obsessions were reflected in the very recording process of the album, which included a ritualistic tour of various significant areas of Glasgow to both gather field recordings, and map out an altar of sorts across the city, upon which the album could be created.

Having perfected their grippingly bleak and abrasive sound on stages across the country with bands such as Slomatics, Conan, Bast, Jucifer, Samothrace, Inter Arma, Orange Goblin and Ufomammut to name a few, the new year will see the band touring the length and breadth of the UK in support of their trilogy of releases, with parts 2 and 3 being released within the next 12 months.

Projections I will be released on November 18 via At War With False Noise. Read more about the band in our Introducing Interview.