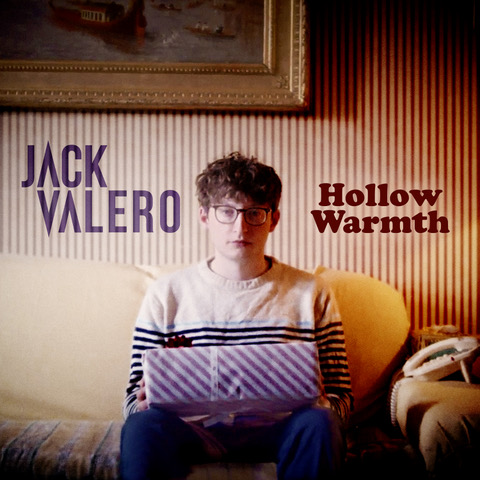 Jack Valero’s debut single ‘Heaven Help Me’ proved to be a popular pick from new music champions, earning airplay from John Kennedy at Radio X and Chris Hawkins at 6 Music being moved to say ‘this is very impressive…..stand out new music from Jack Valero…with feels of classic Elvis Costello’.

And building upon the track’s launch by being the focus of Wonderland’s New Noise feature, while his introduction continued with a support tour with Will Varley that culminated at London’s Lafayette.

Jack now shares his second track ‘Hollow Warmth’ along with its official video. Both ‘Hollow Warmth’ and ‘Heaven Help Me’ will feature on Jack’s upcoming debut EP. Listen HERE. Watch the video HERE.

Candid lyricism with a streak of self-deprecation is Jack’s order of the day in ‘Hollow Warmth’. He poses questions about rekindling a relationship which was ended with “brutal efficiency” in a tender indie-folk song adorned with hushed acoustic guitar and delicately performed piano.But while Jack repeatedly poses questions, they feel like they’re rhetoric in nature. ‘Hollow Warmth’ therefore feels like he is making peace with the situation, rather than striving for a revelation.

‘Hollow Warmth’ was written by Jack and produced by Dave Izumi during sessions at Echo Zoo Studios in Eastbourne.

The ‘Hollow Warmth’ video is the second chapter in a video trilogy that Jack commenced with ‘Heaven Help Me’.  This time directed byEdoardo Cimatti, who Jack credits for his talent and enthusiasm for trying outlandish ideas, the video again depicts loneliness through an absurdist lens. Jack is shown in an otherwise very conventional relationship with a mannequin. Mostly he seemed content, albeit with an occasional look of disappointment when his home-cooked meals are once again left untouched. She, however, doesn’t say a thing…

Jack says, “This continues the abstract motifs of the previous video with a little bleak humour added in. It’s supposed to be a classic breakup narrative, but with a dark twist that can be interpretedin many different ways. We touch on the ideas of isolation again, but this time dive more into the sometimes dark privacy of a person. It can be taken metaphorically or literally, but either way it should make you feel like you’re getting a peek into someone’s very private world and maybe make you feel a little uncomfortable.”

Jack’s solo career started in the wake of the break-up of his band The RPMs. Signed to Xtra Mile Recordings, their journeys took them to Glastonbury, SXSW and beyond. They had come to a natural conclusion just before the pandemic, so Jack spent his lockdown writing new songs inspired by upheaval in his personal life as well as the one playing out around the world, live streaming acoustic sets from home, and working in his local Covid testing centre.

Jack’s next live shows come as part of three triple-bill line-ups with Kelley Swindall. They will play London’s Green Note on July 11th (both with Evan Williams), and then the Kitchen Garden in Birmingham on July 12th (with Hennessey).