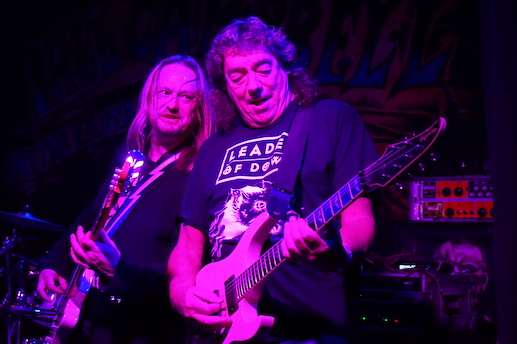 Following the bold statement made by their 2018 debut album Cascade into Chaos, Leader Of Down have returned with a killer new single Hitman which has peaked at Number 2 in the UK iTunes Heavy Metal charts!

Hitman, a tasty appetiser for Leader of Down’s forthcoming sophomore album The Screwtape Letters, features the band’s trademark hard-driving riffs and gritty distorted guitars along with a brilliant guest contribution from former Iron Maiden guitarist Dennis Stratton. Stratton’s late-song solo shines as the song reaches a glorious climax. The track explores the mind of the song’s central character – a charismatic, if mentally unbalanced, murderer for hire – and hits its mark with professional precision!

“It was amazing for ‘Hitman’ to reach such a high chart position,” Stratton declared, “and I can also confirm that I will be joining Leader of Down live on stage to perform ‘Hitman’ at the album launch show in Essex on 8th April, I can’t wait!”

The feeling is mutual for the band who add: “We were thrilled to have Dennis play on our first single from the album and get such a good reaction from everyone. We can’t wait for you to hear this new record and to get back out on stage for our first show since lockdown.”

The Screwtape Letters is released worldwide on 8th April in CD format, with a 20-page full-colour booklet, and as a limited-edition RED vinyl issue via Cleopatra Records. A second single and video from the album, entitled Cat’s Eye Night, is to be released on the same day.

Leader of Down, founded by the late Motörhead guitarist Würzel, have received rave reviews for their live shows from around the world supporting the likes of Phil Campbell and the Bastard Sons and Nitrogods and also headlining in their own right.

Leader of Down will be supporting Tank on their spring UK tour before headlining the Heavy Metal Mayhem Festival in England. Many more shows will follow throughout 2022 and the band have now been added to the Hard Rock Hell Festival in January 2023.