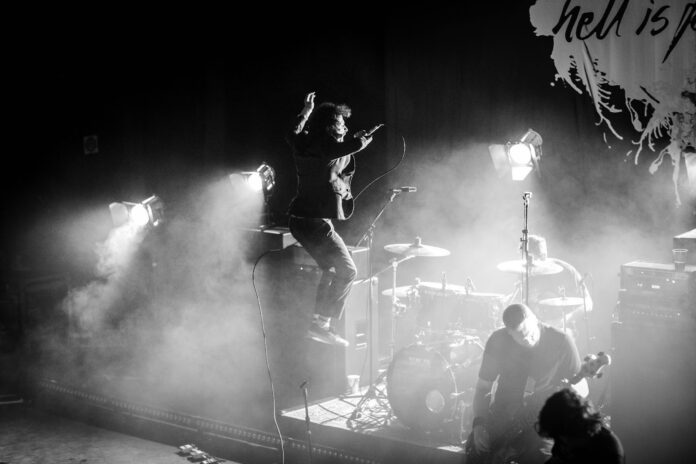 After 15 years on hiatus, British post-hardcore stalwarts Hell Is For Heroes are back with a brand new track I Should Never Have Been Here In The First Place, out today (15th Dec) via Big Scary Monsters. Recorded and produced by Hundred Reasons guitarist Larry Hibbit, the song is a brooding rocker that bursts joyously into a heart-swelling, melodic anthemic chorus synonymous with the band’s earlier output.

Hell Is For Heroes was born on a late summer in 2000, when old school friends Will McGonagle (Guitar), Tom O’Donoghue (Guitar), James ‘Fin’ Findlay (Bass), and Joe Birch (Drums) met Justin Schlosberg (Vocals) through a mutual friend. The band first hooked up in a pub in Camden for a life affirming drinking session and to discuss musical similarities. Recording and touring followed throughout 2001 with the band playing shows wherever and whenever in order to hone their craft, later finding success and releasing seminal albums The Neon Handshake (2003), Transmit Disrupt (2006) and Hell Is For Heroes (2008).

In 2008, the Brit-rockers decided to call it a day. In 2018, the band resurfaced and re-released their #16 UK Official Charts debut album, The Neon Handshake (via Big Scary Monsters) onto vinyl to mark its 15th anniversary. They played a slew of sold out shows across the UK culminating with two homecoming shows, at London’s Shepherd’s Bush Empire and later appearances at Download and 2000Trees Festivals in the summer of 2018. Through this reconnection on the road, the idea of making music together again was respawned. Skip forward to 2022 and I Should Never Have Been Here In The First Place is the result.

Vocalist Justin Schlosberg says: “It’s taken us the best part of 15 years to get back in the studio and a lot has changed. But making music with friends is still a special kind of fun just as it always was, and we can’t wait to play them live (as well as the old songs). Not to oversell it, but we’re reasonably certain the forthcoming tour with Hundred Reasons and My Vitriol will be beyond epic.”

In 2023 Hell Is For Heroes are set to embark on a UK tour with long-time friends Hundred Reasons, kicking off at Leeds O2 Academy and will finish up at the iconic O2 Brixton Academy in London on 4th March, with a sold out stop in Bristol, Manchester, Glasgow and Birmingham en route.