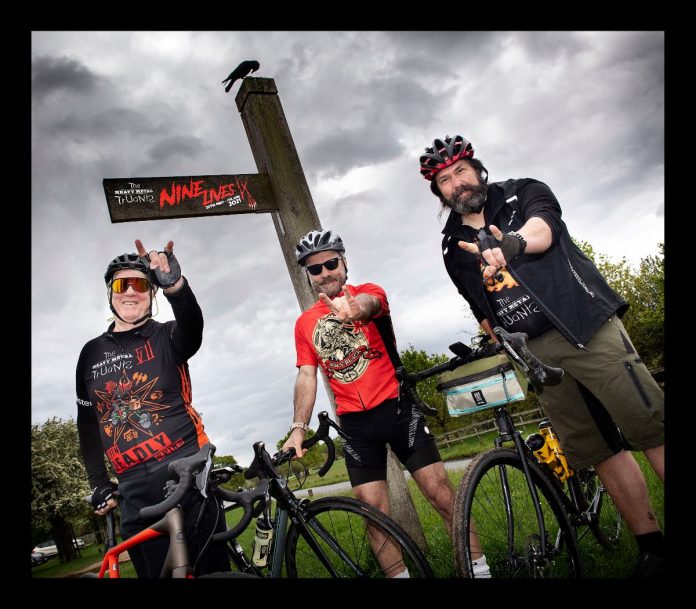 The HEAVY METAL TRUANTS, a group of heavy metal-loving cyclists from all corners of the world, have come together for the past two weeks in a collective fund-raising challenge for leading British children’s charities. In a Herculean effort between them they have cycled, run and walked 37,917 miles – which is beyond the equivalent of the planet’s circumference – in just 12 days and smashed their target of bringing their long-term total of funds raised to over £1 million.

Founded in 2012 by Iron Maiden manager Rod Smallwood and ex-Metal Hammer magazine editor-in-chief Alexander Milas, the Heavy Metal Truants have brought together fans, musicians and entertainment executives for an annual fund-raising cycle ride from London to Donington to coincide with the Download Festival.

Having traditionally been a 175-mile ride with an average of 40 participants, 2020 became the first virtual cycle ride due to the Covid pandemic, with riders clocking up their miles on local roads and cycling machines. This new format enabled many more cyclists from around the globe to join in and for 2021’s event, the ninth Heavy Metal Truants adventure, more than 260 participants – including Iron Maiden singer Bruce Dickinson, along with walkers and runners for the first time – joined forces in the same fashion.

Sponsored by friends, family, colleagues, employers and acquaintances they have raised a staggering amount for disadvantaged children, a cause even more essential in a prolonged period when charities are suffering so badly.

Iron Maiden manager Rod Smallwood comments: “Download’s support for the Heavy Metal Truants from day one has been absolutely terrific and much appreciated. It’s especially important now given how hard these charities have been hit by the pandemic, we sincerely thank Andy and Melvyn for their incredible support. It’s all about the kids and these four amazing charities after all – that’s why we do it!”

Festival Republic’s Melvin Benn says: “We’re delighted to be able to support the Heavy Metal Truants as the official charity partner of the Download Pilot. It’s a very special event and a very special milestone for the Truants as they’ve hit over a million pounds raised for these four incredible charities”

Live Nation and Download organiser Andy Copping says: “It’s always an honour to be able to support the Heavy Metal Truants. Cycling the equivalent of the whole way around the earth in twelve days? That’s an incredible achievement. We couldn’t be prouder to be partners with them.”

Heavy Metal Truants co-founder Alexander Milas adds: “The Heavy Metal Truants are a tremendous expression of our musical community. So many people – fans, artists, and indeed industry – have joined us or supported us over the years so hats, or indeed cycling helmets off to them. A million pounds isn’t the finish line for us – we are just getting started so watch this space!”

The Heavy Metal Truants have seen tremendous support from the music industry over the years. From Download promoter Andy Copping and John Giddings who runs Isle of Wight festival, to musicians from bands including Saxon, Trivium, Paradise Lost and more they have all joined fans to put on the lycra and pedal the miles. The 2017 event was even waved off from Alexandra Palace by the one and only Brian Blessed!

To help raise even more for the kids the Heavy Metal Truants have also run auctions including memorabilia personally donated by Queen, Metallica, KISS, Bon Jovi, Maiden and many more, alongside spoken word events with legends of the heavy rock scene and even Heavy Metal Curry Nights.

The Heavy Metal Truants is part of The Truants Foundation which has raised over £4 Million for children’s charities over the past 10 years. It became a registered charity: No. 1191441 in Nov 2020.
https://heavymetaltruants.com
www.thetruants.co.uk