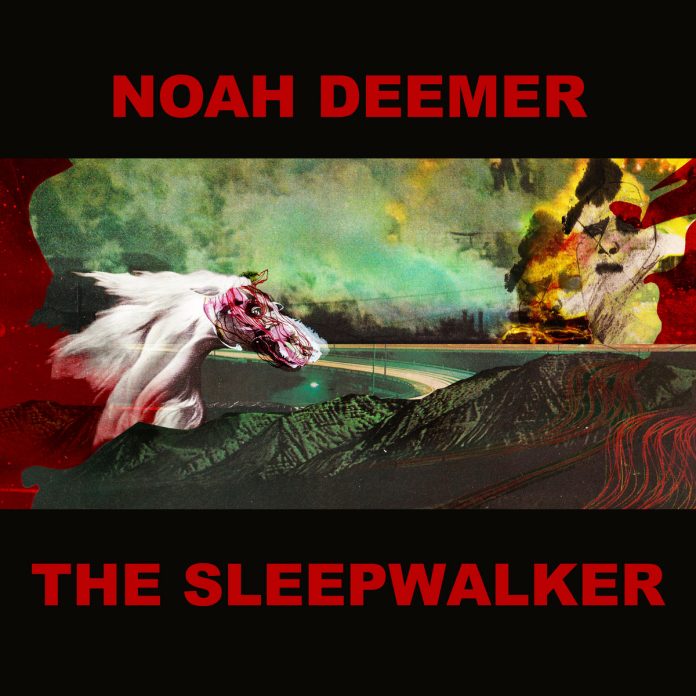 I know next to nothing about Noah Deemer other than he is a songwriter in NC and NYC, which I presume to be North Carolina and New York City and old friends with the drummer from UV-TV a post-punk come power pop trio. He`s recently released a seven track EP called `The Sleepwalker`.

This extended play opens with `Modern Ruins` an instrumental number that is a little off kilter and sort of fades in and out with synth swathes, keys, guitar riffs and drum machine beats. We do have some vocals that drift in and out which I have to say I couldn`t decipher. A sort of track that would be the ideal theme tune for a late night cult tv programme. A drum machine sets the pace on `Lay Your Hands` with vocals that are almost crooned quite possibly about a romantic request for tenderness from a partner real or imagined. There`s a delightful saxophone solo that joins in for the last seventy seconds or so dispensed by Crowmeat Bob.

`Underwater Green / Coming Down` blends into each other with the former a brief instrumental with more sax snippets from Bob before the latter of drum machine, keys, guitar chords and horns being a platform for the singer to share some strange lyrics about conceivably sobering up from a drug induced high. Title track `The Sleepwalker` builds quietly with keys, guitar and drums supplied by TJ Maini. A curious predominantly instrumental composition that was unnervingly compelling.

`Please Life` is a short noisy, fuzzy punky submission with some really far out lyrical content and a guitar solo delivered by Boogie Reverie. Another odd number follows with `Outlaw` which enjoys a deep organ like texture and becomes a little jazzy and at times poppy. There are some mystifying biblical references conveyed in almost a spoken word poetic diatribe with some strings which Libby Rodenbough provided along route.

We close out with `Flying` a further instrumental led by piano keys and maybe guitar chords on this dreamy quite hypnotic song.

I have to say I thought `The Sleepwalker` EP was a joy to behold. It is offbeat, eclectic, experimental and unconventional but has a mesmeric like quality at times. Sometimes, the lyrics were beyond me but nevertheless were entertaining when there were some. It`s not going to be everyone’s cup of tea but that to me is the thrill of different musical genres. An imaginative and creative offering that will take over your life for twenty minutes if you can spare the time.