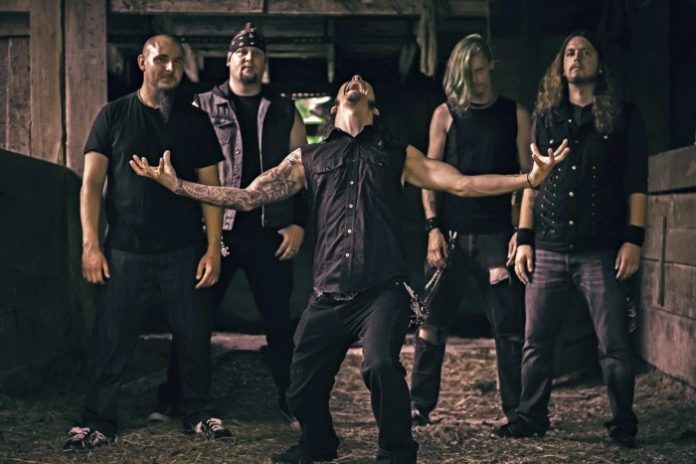 Wisconsin-based newcomers PRODUCT OF HATE chose their band name for a good reason – a crushing response to the world in which we live. The five-piece honed their sound by sharing the stage with Lamb Of God, Meshuggah, Gwar and Testament to name a few.  The band is pumped and is now ready to introduce the world to their debut album Buried in Violence! The album was mixed and mastered by the legendary James Murphy, known for his work with Death, Testament and Obituary.

PRODUCT OF HATE has confirmed a February 5, 2016 release date for their debut album Buried In Violence via Napalm Records.

“It’s hard to believe that it was four years ago that we headed for Ohio to shoot with Robert Kurtzman’s Creature Corps andAshley Laurence. As an independent band at the time, it was a big step for us – an amazing experience that we had a blast with. When Bloody-Disgusting premiered the original cut of the video in 2012, we had no idea that we’d be back here 2015 as part of the Napalm Records roster. Since that initial premiere, we’ve grown so much as a band, and as people. Our music has become so much tighter, and we’ve definitely matured. Napalm has been doing right by us, and with the re-premiere of ‘The Unholy Manipulator,’ we look forward to seeing it reach new audiences as we move toward the release of Buried In Violence this coming February!”, says vocalist Adam Gilley.

Drummer Mike McGuire adds, “Making ‘The Unholy Manipulator’ with Bob Kurtzman and all of the amazing talent at his Creature Corps was an incredible experience. Everyone welcomed us with open arms, even though we showed up at 4am and set-up camp in Bob’s living room (whoops, sorry again buddy!) when we were actually supposed to be at the guest house down the street!”

Be on the lookout for new music soon as well as tour dates, which will be announced in the coming weeks!