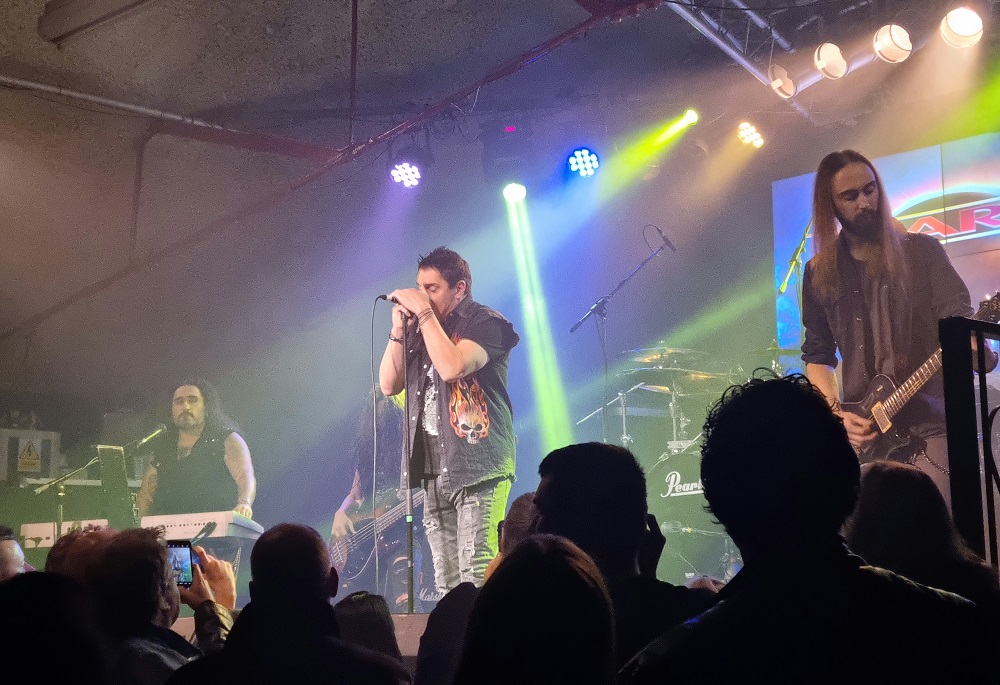 Beth Blade and the Beautiful Disasters released an album back in 2019 and when I reviewed it on these pages I said: “and it is a brilliant example of what hard rock can be when it is done right.” And, watching BBATDB live for the first time that seems to be ever more important. There’s one song here, that sums them up better than all the others: “I Ain’t Got Nothing (If I Ain’t Got Rock N Roll)”. The charismatic Blade – who is upset that she can’t get into the crowd tonight given the height of the stage – carries the spotlight in the main (and she knows it too) but the band as a whole are living their dreams. Look at them, they look like rock stars, they know their heroes and they do a fabulous job of emulating them. “Jack And Coke” is dedicated to Lemmy and with good cause, but as they play the closing solo’s both Blade and Luke Gilmore strike proper guitar hero poses and there’s only one conclusion to draw: if ever there’s a band that needed to be on stage, it’s this one.

Gin Annie have got to the point in their career that happens to a lot of “local” bands – and the Black Country is their hinterland – they are simply too good for that level. Listen to “Love Ain’t Here” and “Chains” and it’s absolutely clear. They are good. And I don’t know whether it’s the fact I haven’t seen them play a full set for three years, but they seem to have gone up a gear or two. They’ve got a sleazy side – check out “Next 2 Me” and “New Bad Habit” – and even if the crowd, for a Friday, is a touch subdued (the fact that Storm Arwen is battering the venue hasn’t helped) then they pull them round by the end as “Born To Rock N Roll” was, well born to do. Gin Annie are a band that will have been stalled a touch by the pandemic, but with (variant’s not withstanding) gigs back, they are set fair to go a long way.

Of all the ways I expected the Hardline show to start, then a snippet of “Nessun Dorma” wasn’t top of the list. But its almost perfect , given the fact that most of the band are Italian these days (Alessandro Del Vecchio – who has worked with just about every melodic rock band on planet earth -is producer and almost musical director here) and there’s a level of musicianship. Then – and we might as well get this out of the way early on – there’s Johnny Gioeli. The only one that’s been in the band since 1991 and to be quite frank, the one with the best voice in rock n roll, there’s a reason Axel Rudi Pell uses him, after all.

But this is all about Hardline, his band, never mind who played on the debut record, look who wrote the songs. And since we’re getting everything out of the way early, I’ll also admit that I lost touch with the band after the classic debut – until that is, they chucked out the astonishingly good “Heart And Soul” this summer. The harvest of all this is I knew early and later stuff, and not a lot in between. Handy, then that the set is essentially that.

“….Soul’s” opening song “Fuel to The Fire” performs that role here too, and the second one “Surrender” is the follow up. And its noticeable that the crowd – not large, but enthusiastic for the headliners for sure – are bang into it, finally.

After which, basically, we are off and “Everything” is still fabulous, even after 30 years. “Taking Me Down” and “Dr. Love” are equally fun, but there’s something else too. Gioelli – who freely admits he’s itching for these shows (“it was worth the eight million forms we filled in to be here” he notes)  and you can visibly see him grow into the role, having fun with the band members in between – and sometimes during – the songs. And his voice, is stunning, of course it is. “In The Hands Of Time” is bang in the middle of the set, but feels like its centrepiece too. It is wonderful. Mario Percudani had big shoes to fill on guitar but, how he does it!

The end of the set is full of early stuff. “Life’s A Bitch”, and others, before a mid-period “Fever Dreams” and an absolute beauty in “Rhythm From A Red Car” finishes the set.

There’s an encore (“we don’t usually like to pretend we are rock stars, but I had to pee so bad….” Laughs the singer) and its “Hot Cherie”, it almost had to be. It’s had over 5m Spotify plays and was a genuine hit. But that’s not the impressive thing about them, in all honesty. Its more the opposite. The fact that since those heady days they’ve been making brilliant music almost under the radar. Here, though, for 90 glorious minutes, they give a hard rock masterclass.