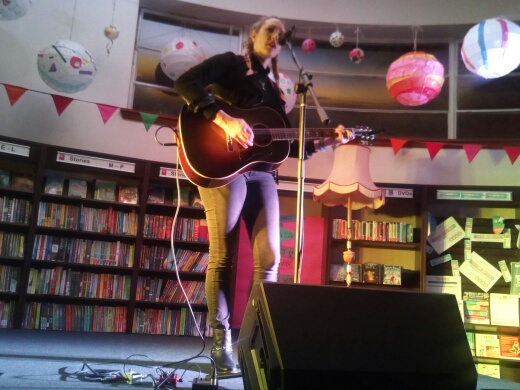 With two critically acclaimed albums in tow, Hannah Aldridge arrived at Thimblemill Library on the Birmingham/Black Country border with a reputation to uphold. Now a frequent visitor to the UK & Europe, “touring is tough, cool but tough” and this has been a long old trip for this Alabama daughter in what has resembled the North Pole for much of the last two months. She misses her son dearly, and longs for a drive down to the Gulf Coast with him, as she introduce s “Black & White” one if several thoughtful songs from her debut album Razor Wire played here.

Both album title tracks are played including “Gold Rush” which kicks off the 2nd set and a welcome audience request for Tom Waits “Take it with me” from Mule Variations is performed beautifully. James LeBlanc’s “Yankee Bank” – co-written by her dad Walt- is a personalised account of an issue that still wracks America’s Deep South and is played wryly by the daughter of Walt Aldridge here. The set was closed with audience participation number “Burning Down Birmingham” which went down particularly well with the Black Country natives and “Howlin’ Bones”.

Excellent support too, from Bewdley based Ellisha Green, her beautifully soulful voice for such a young woman on songs like “Volcano”.

Hannah is back in the UK for a couple of shows in the summer.