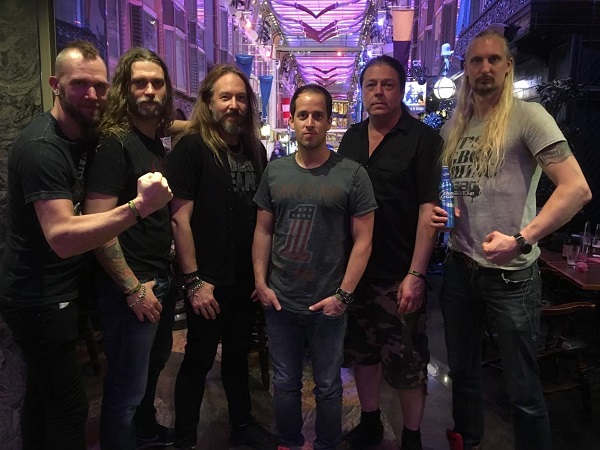 A new era in the history of Austrian based record label Napalm Records has begun, and this is it!  The signing of the mighty HammerFall is now official – signed, sealed and inked in blood!  HammerFall – the saviours of Heavy Metal and one of the most influential and best Metal bands on the globe are now under the wings of the double-headed eagle!  A band which is not only a house-hold name worldwide, guaranteed for delivering high-quality music and furious live shows for the past two decades, HammerFall have been the undisputed masters of ground-breaking anthems since the start of their remarkable career in 1993!  What is most exciting about HammerFall is that the band is still on the rise and hungry for even more – and now have a label partner by their side that is willing to go above and beyond to make this happen. This partnership is set to conquer the music world!

HammerFall have proven to be much more throughout all these years – aside from their obvious devotion and dedication, the guys have always shown themselves to be extremely hard-working, but above all, down to earth human beings who inspire fans with their music. It is rare to see an established band maintain and grow their status over such a long period of time. This is one of the many reasonsNapalm Records is so proud, honored, and even humbled to announce the signing of mightyHammerFall!  This partnership is not just one of the most exciting and high class signings for Napalm Records in their history to date, but it is also an important step for the band, as it marks their monumental 10th studio album and beyond. Napalm Records is planning a massive world-wide campaign for this upcoming masterpiece to be released on November 4, 2016 that will leave mouths ajar in all corners of the globe! HammerFall & Napalm Records will make history together in 2016 and beyond!

Joacim Cans, HammerFall singer:
“After two exciting decades in the line of metal duty  I feel that signing with Napalm Records is the necessary step we need to take in order to grow as a band and reach the next level.
Even-though we’ve been around for such a long time we are still hungry and craving for more. There are still territories left to conquer and metal hymns left to write.
In the past Napalm has proven to be a very strong and reliable label with great success and chart entries with bands like W.A.S.P., Monster Magnet, Kamelot and Powerwolf.”

Oscar Dronjak, HammerFall guitarist:
“HammerFall has been very successful and happy with Nuclear Blast for almost 20 years, but in order for us to continue to grow as a band and reach new heights we needed a fresh challenge. This felt like a right and necessary step at this point in our careers, in order to keep moving forward and upward at a high speed. We view this label change as an opportunity to create something special, and firmly believe our best times are still ahead of us. That’s why we’re very, very excited to work with the people at Napalm Records for our upcoming, 10th studio album!”

Thomas Caser, CEO of Napalm Records, states:
“The signing of this extraordinary band is the major milestone for Napalm Records. HammerFall’s signing unlocks a lifetime achievement for all of us at Napalm Records, but also for me personally as well!  We put all of our efforts into making this happen as a team, as we believe HammerFall are one of the Greatest Heavy Metal Bands of All Time, and this is just the start of a huge world-wide campaign.  Fans can feel rest assured that we will spare no efforts to make HammerFall bigger than they have ever been!”