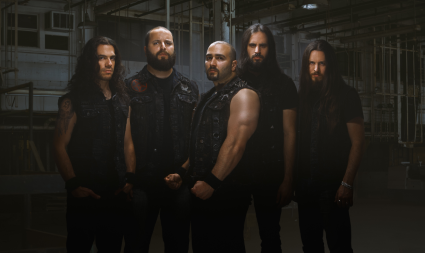 Accomplished IsraeliThrash Metal act Hammercult have lined up the release of their blistering third album, ‘Built For War’, on SPV/Steamhammer, as a CD, Digipak (with bonus DVD), coloured vinyl (with bonus track and printed inner sleeve), plus download, on August 28th. ‘Built For War’ ups the ante even higher than its acclaimed predecessor, ‘Steelcrusher’, integrating ever more extreme elements of hardcore, black metal and punk into Hammercult’s intoxicating thrash concoction.

Vocalist Yakir Von Hammer states that “Every song on the album is the kind of pumping anthem which Hammercult are known for – but this time we’ve taken the songs to different places, with a more melodic and more original approach which really stands out. The vocals on ‘Built For War’ are very unique and range from screams to growls, hardcore shouts to clean vocals – which I honestly believe has never been done before by a single performer. If I had to summarize ‘Built For War’ in a single sentence it would be ‘Destruction meets Manowar in an explosive mix of extreme music and true metal.’”

Regarding album opener ‘Rise Of The Von Hammer comments; “There’s a good reason why we decided to open the album with this song. It’s a total metal powerhouse! A true fist-pumping war anthem. Slower but heavier than most of the Hammercult songs, it feels like storming the battle front, riding a war elephant.” ‘I Live For This Shit’, a kind of leitmotif for the band, comes across just as powerfully. Von Hammer: “This song is about my passion and my way of life. Metal, the road, the roar of the crowd and the strength I get from the people I meet across the world as we spread the war machine known as Hammercult … I live for this shit!”

Unafraid to tackle sensitive issues, Hammercult have never penned a more political, socio-critical lyric than ‘Spoils Of War’. An Israeli born and raised, this song pretty much tells Von Hammer’s life story: “The lyrics are about how we, the people, are misled by political agendas, left and right – which are all the same and at the end of the day serve to fuel the war industry, which is very profitable in the Middle East.”

The martial cover artwork courtesy of Péter Sallai (Sabaton, Civil War, Kataklysm) suits the uncompromising sound of the album to a tee. Von Hammer: “The story behind the cover art process was basically my idea to highlight the progression of Hammercult with this album and to present it visually – in the modern world we live in.”

The album comes complete with first-rate bonus material. The DigiPak version includes a live DVD recorded in Tel Aviv two days before the work on ‘Built For War’ commenced. “The best way to listen to Hammercult is live,” Von Hammer says, “on stage is where we really shine, and we wanted to prove that and capture the live energy on stage and bring it to the masses.” In addition, the album’s vinyl version features a cover of the Slayer classic ‘Evil Has No Boundaries’; “During our tour with Sepultura in 2013, the metal community had the news that Jeff Hanneman had passed away. On that day I promised to myself that we would cover Slayer.” 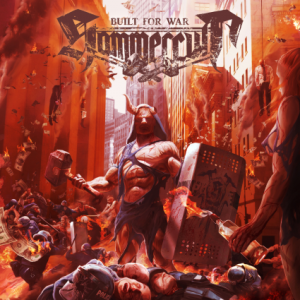