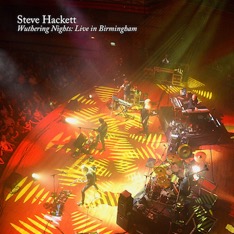 Steve Hackett will host an Exclusive Fan Launch for his new DVD, Wuthering Nights : Live in Birmingham on 15th January 2018.

There will be a Q & A with Roger King and Steve followed by a screening of the full concert in 5.1 surround sound.

The Launch will take place at Everyman Kings Cross, 14-18 Handyside Street, Kings Cross, London, NIC 4DN. Tickets for the event are £17.50 each (plus booking fee) and will be available from 10.00am on Friday 24th November from www.everymancinema.com  Doors open at 7.00pm Q & A will start at 7.30pm.
The DVD of Wuthering Nights : Live in Birmingham is released on 26th January through Inside Out Music. It was recorded on Hacketts Genesis Revisited with Classic Hackett Tour in May which celebrated the 40th Anniversary of classic Genesis album Wind & Wuthering. As well as 5 tracks from the iconic album it also features other fan favourites including Dance On A Volcano, Inside & Out, Firth Of Fifth, The Musical Box and the classic Los Endos. This mesmerising show also marks the first ever live performance by Hackett & his band of the tracks One for the Vine and Inside & Out, as well as material from his latest studio albumThe Night Siren.
The band are: Roger King (keyboards), Gary OToole (drums/percussion), Rob Townsend (saxes/flutes), Nick Beggs (bass, stick & twelve string) and Nad Sylvan on vocals plus special guests John Hackett and Amanda Lehmann.
Pre-sale Link:
https://store.hackettsongs.com/
www.hackettsongs.com
@hackettofficial
https://www.facebook.com/stevehackettofficial
www.insideoutmusic.com