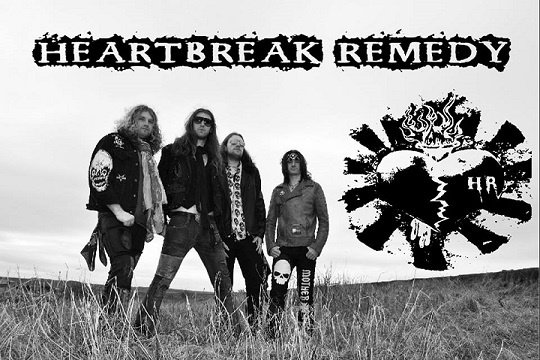 On 2nd May 2015, HEARTBREAK REMEDY, are releasing their debut album, Midnight Groove. The album follows the release of their two EP’s, the first was released in time for the bands first gig in May 2013 and the second in November 2014. Midnight Groove contains songs which have featured in Heartbreak Remedy’s live set since their first gig but also features some new songs that haven’t yet been played live.

This self released, 13 Track Album, has been the main focus of early 2015 for Heartbreak Remedy, but they have also found time to take to the stage across the UK alongside The Paul Raymond Project, Hardcore Superstar, The Quireboys, Sister, Stop Stop among others. The highlight of the year so far being at Hard Rock Hell Festival, where the band played to a fantastic appreciative crowd, and has earned them a place at the Hard Rock Hell Road Trip in Ibiza, which will be followed by a number of headline and support gigs and lots of UK festivals throughout the year.

Midnight Groove is a great accomplishment for the band, which at the time of its release won’t have even been gigging 2 years. It will be available for pre-order on Sunday 25th April via www.heartbreakremedy.bigcartel.com and released Saturday 2nd May in time for Heartbreak Remedy’s gig at Noize Level Critical Festival in Nottingham.      Matty, Callum, Luke & Steve.