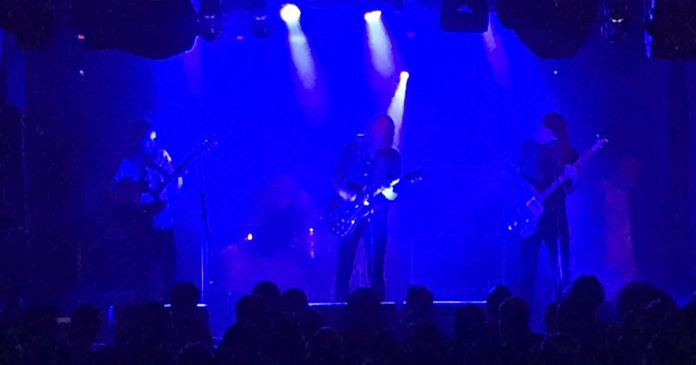 In many ways, Gothenburg’s Bombus are the absolute perfect foil for tonight’s headliners. Retro but with slightly more of a rock n roll sheen than Graveyard maybe, there is a lot to like about the four piece. Their approach of having two vocalists is interesting – both Feffe Berglund and Matte Säker take turns as singer – and their sound is hypnotic too, when they lock into a groove. “Let Her Die” provides a thudding opener, the title track of their most recent “Repeat Until Death” record is a right good riffing affair, but it is “Rust” that particularly impresses. It’s lead soars. “Enter The Night” is typical of their unconventional approach. From its early stomp to its drum solo, then to its hints of Crowbar before the close, there is something pleasingly offbeat here. Their 45 minutes concludes with “Into The Fire”, a more epic affair, but one that opens out at the end with just the hint of a Maiden-style gallop. Impressive stuff from the Swedes, and a set that suggests there is plenty more to come. 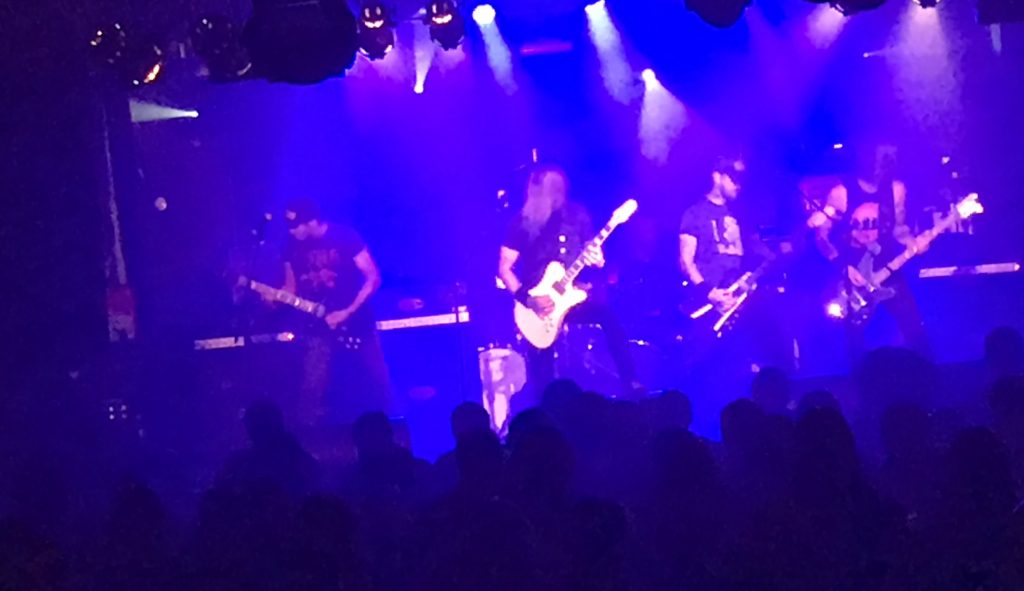 Graveyard have – and let’s be honest about this from the off – always been a band that likes to let their music speak for itself. You don’t go to Graveyard gigs expecting lengthy monologues, or addresses on the state of the world.

What you get is 80 minutes of songs expertly played. And so it is here.

Full of fanfare and bravado they are not. When they….walk on…..to “Walk On” they sort of shamble out, sneaking up on you before you know they are there almost, at least until Joakim Nilsson plays his guitar and sings (appropriate word for him actually) the lyrics. They have always had a touch of the psychedelic about them, and that one is a lengthy jam thing, but actually, it is impressive how little excess there is here.

Songs like “The Fox” from this years brilliant “Peace” album have slotted into the set perfectly, and this is a concert which is about feel and tone, rather than visceral excitement. To that end, the likes of “Uncomfortably Numb” set the bar with some real wizardry, but “Buying Truth” injects some outright metal into proceedings.

Not natural communicators, it is only when Truls Mörck sings “Bird Of Paradise” that there is any interaction, but that’s fine, that’s the way they do things, and that’s them being natural. It does though strike as slightly incongruous that the sleaze of “Magnetic Shunk” should follow – but then Graveyard is a band who does things on their terms.

After they close the set with the always welcome and always superb “Hisengen Blues” they encore with “Low (I Wouldn’t Mind”) which includes a drum solo, while the misery and angst of “Ain’t Fit To Live Here” actually engenders the first moshpit of the night. It is unexpected.

Graveyard – and this is meant in praise – are never going to be the life and soul of any parties, and they aren’t going to be the soundtrack to the office Christmas do. They wouldn’t want to be either, and that is to their credit. All they’ve ever wanted to do is play the music they wanted to make and they do that just fine here.