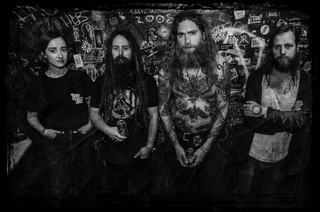 London/Brighton heavy contingent Grave Lines who released latest album ‘Fed Into The Nihilist Engine’ in the first half of 2018 have announced UK tour dates for February 2019 with Dystopian Future Movies. Vocalist Jake Harding comments,
‘We always enjoy working with bands that fit in with our ethos and aesthetic without necessarily having the same kind of sound and Dystopian Future Movies intense atmosphere is a perfect fit for that so we couldnt resist teaming up with them for a short run of dates.  To make it a bit special we are also collaborating on some music with them which will be available on the tour in a limited number of copies. We’ll be bringing the gloom two fold in February!”
Released via London label New Heavy Sounds, ‘Fed Into The Nihilist Engine’  is a must listen for fans of all things heavy, however anybody seeking music that delves into the darker and more introspective aspects of the human condition, will find much to love within its expansive tracks. At times quiet and melancholy. At times an oppressive and miserable onslaught of crushing riffs and filth-laden grooves. Fans of Yob to Neurosis, even Bauhaus or Dead Can Dance, take heed, FITNE reaches out to encompass elements of them all.
UK tour dates w/ Dystopian Future Movies:
Thursday 7th February, Record Junkee, Sheffield
holyspiderpromotions.bigcartel.com
Friday 8th February,  Wharf Chambers, Leeds
www.wegottickets.com/event/456847
Saturday 9th February, Black Heart, Camden, London
www.seetickets.com/event/grave-lines-dystopian-future-movies/the-black-heart/1293168
Sunday 10th February, Chameleon Arts Cafe, Nottingham
dystopianfuturemovies.com/shows