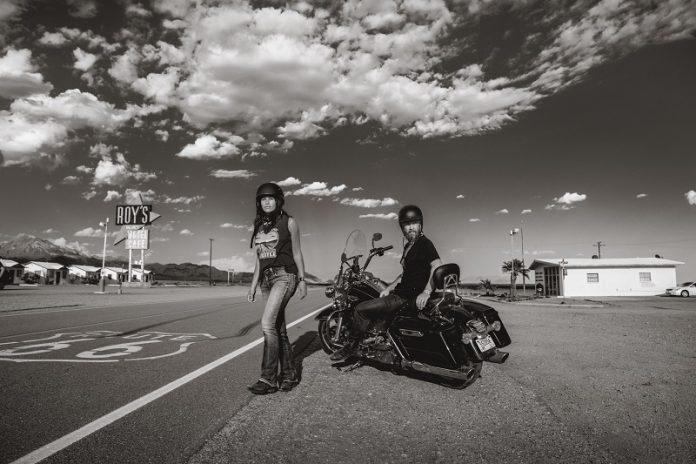 In the Fall of 2016, while the country reels from a seemingly unstoppable vortex of disorientation, musicians & lifelong soulmates The Grahams, set out on a spectacular motorcycle expedition across America’s time warped Route 66. Amidst the neon, the romance, the heat, the music and the sheer power of nostalgia, The Grahams explore the concept of “real” America with the eccentric and notorious characters who live and work in the strange and mysterious world that is Route 66.

Featuring a surreal soundtrack with contributions from Nashville’s finest; Elizabeth Cook, Aaron Lee Tasjan, Dylan LeBlanc, Chuck Mead, Lilly Hiatt, The Grahams and many more, Love & Distortion is not a travel guide or a musical biopic. This feature length documentary, which follows The Grahams down the Mother Road, is an unconventional narrative weaving in and out of moments and realities that can be found in the various sub-cultures of America’s Main Street.

On the first taster from the soundtrack, which will only be available as a limited edition 7″ single at UK shows, until the full soundtrack’s official release later this year, The Grahams interpret The Pretenders‘ ‘Don’t Get Me Wrong‘, a Top 10 hit on both sides of the Atlantic in 1986, and Mazzy Star‘s 1994 cult classic ‘Fade Into You‘.

Alyssa and Doug Graham have spent nearly their entire lives exploring music together. Friends since she was 7 and he was 9, they became a couple in their teens, then husband and wife. Somewhere along the way, they also became The Grahams, a dynamic Americana duo who’ve married their love of adventure with a desire to build on foundations laid by their musical predecessors. Their first song-crafting expedition, along the Mississippi’s Great River Road, became their 2013 debut, Riverman’s Daughter. For its follow-up, Glory Bound, they rode the rails – and wound up recording not only a studio album, but Rattle The Hocks, a documentary and live album recorded on the move and in venues from Sun Studio to Amtrak’s famed City of New Orleans train.