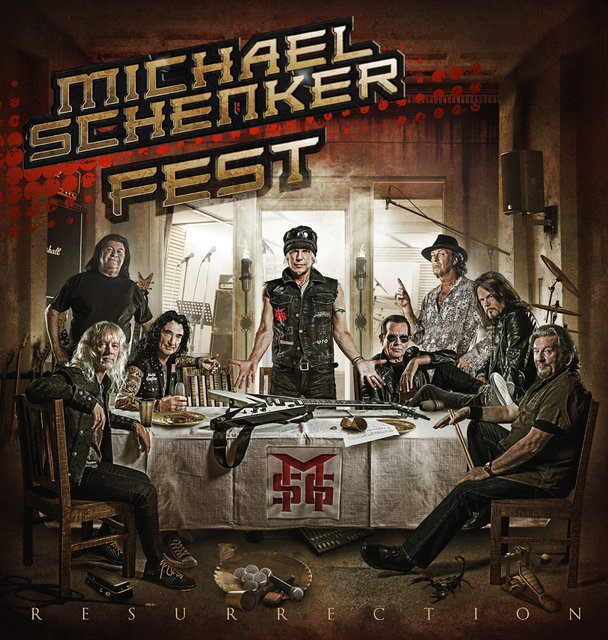 The band completed the recording of Resurrection (out March 2nd) with producer Michael Voss-Schoen on board, alongside the voices of M.S.G. singers Gary Barden, Graham Bonnet and Robin McAuley. You can also hear Doogie White (Michael Schenker’s TEMPLE OF ROCK) as well as musicians Steve Mann(guitars, keyboards), Ted McKenna (drums) and Chris Glen (bass). The album also features an array of impressive guest appearances including Kirk Hammett, Wayne Findlay and Michael Voss-Schoen.

Today, Michael Schenker explains his idea behind the concept of the upcoming album and tells the story behind the inclusion of several singers in the project:

The band has also already released their first digital single ‘Warrior‘ as well as a video including some impressions of the studio recording process which can be seen here: https://www.youtube.com/watch?v=D2VtSdZHKbE

Michael Schenker is one of the most significant rock guitarists in the history of music. He has mesmerised the rock community since the 70’s with his characteristic guitar play and constructed himself a monument during his time in UFO by writing hits like ‘Doctor Doctor’ and ‘Rock Bottom’, as well as SCORPIONS classics such as ‘Lovedrive’, ‘Coast To Coast’ and ‘Holiday’, among others. His playing has influenced several generations of guitar players enormously.

Back in 1979, the “German Wunderkind” decided to be his own boss. He founded the MICHAEL SCHENKER GROUP aka M.S.G. and released the masterpieces Assault Attack and Built To Destroy, the live legacy One Night At Budokan as well as the McAULEY SCHENKER GROUP pearls Perfect Timing and Save Yourself. M.S.G. also became the home of great vocalists, most notably Gary Barden, Graham Bonnet (ex-RAINBOW) and Robin McAuley. Those guys were also a part of the comprehensive MICHAEL SCHENKER FEST, whose celebrated Tokyo show was released as live CD, DVD and Blu-ray this March recently passed. Now the time has come for Michael Schenker to move another step forward: by releasing the new MICHAEL SCHENKER FEST studio album, he fulfils the long-awaited dream of all hard rock fans!

Previous article
REVIEW: RICK SHEA AND THE LOSIN’ END – THE TOWN WHERE I LIVE (2018)
Next article
Grahams On Tour