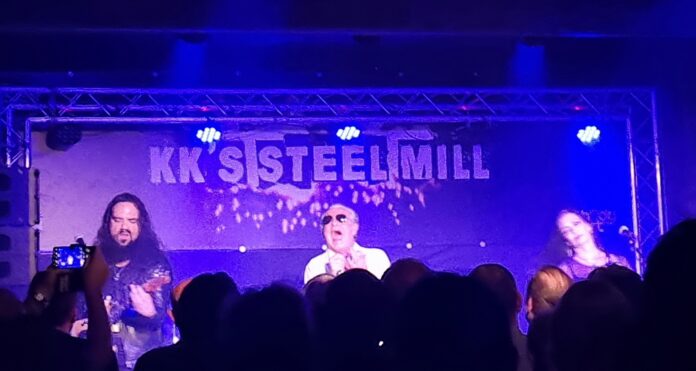 Beth Blade And The Beautiful Disasters have just released a new album. “Mythos, Confession, Tragedies And Love” is a wonderful record, and you know that the band agrees. Most of their 50 minutes here comes from it, and I’d argue that BBATBD are absolutely at the top of their game. “The Otherside” – as it does on the album – is the opening statement, but this is an outfit that is writing abut things that matter now. “Tonight I’m With You” is the fun anthem for the end of lockdown, “Hold Your Heart” is the different side of the same coin, but reinvigorates the big old power ballad. And if “Undo Me” is lust filled and unashamedly so, then “Persephone” is probably the best thing they’ve ever done. Blade herself is a charismatic performer and does her best to work the Thursday night crowd on older material like “I Ain’t Got Nothing (If I Ain’t Got Rock N Roll)” and “Jack And Coke” (“this one is for Lemmy” she offers) and the band behind her are backing it up. It all means that Beth Blade And The Beautiful Disasters are up there with the best underground bands there is right now. The new album is so good and this set is proof that they are but a few festival shows and a well placed support tour from a breakthrough.

Right at the end of the set, Graham Bonnet has left the stage and his band members are left. They deserve this moment in the spotlight too, because they had been sensational for 75 minutes.

This might be what Graham Bonnet has done throughout his career, surround himself with brilliance. He’d said it himself in the first half of the set. “I owe this to Richie Blackmore…..”

That was a sentiment that summed most of this up too. Billed As “Back To Earth And More”, it gave Bonnet the chance to showcase the album he did with Rainbow. 1979’s “Back To Earth” spawned that hit, that song, the one they can drop still, 43 years later and it still has everyone screaming “Ever since you’ve been gone,” in unison.

There are other moments too. “Eyes Of The World” is a proper piece of metal to start, and “All Night Long” is every bit the equal of “Since You’ve Been Gone”.  Credit to them too, for not playing the songs in order and in full. Instead, its well-paced and “Love’s No Friend” shines, and it gives Bonnet the chance to play his favourites such as “Makin’ Love”.

It’s what happens after that, though that perhaps surprises. Bonnet disappears – and at 74 who can blame him – and the Band part of the Graham Bonnet Band lets rip. Conrado Pesinato is as good as guitarists get, Alessandro Bertoni’s keys have more than a hint of Deep Purple about them, while Beth-Ami Heavenstone bass Thunders. Their solo is a highlight, as is the one drummer Shane Gaalaas does a little later.

That is the band that Graham Bonnet used on his recent “Day Out In Nowhere” record. Part two of the show (as it were) is the “and more” from the poster and begins with “Imposter” – a slice of metal from it. There’s another new song too. “Uncle John” is one of the best on “…Nowhere” and it is here too.

Elsewhere, there’s a smattering of other stuff from the canon, “SOS” and “Desert Song” from the one album he made with Schenker (“I only played one gig, you probably know why….”) and the one he made with Status Quo, “Night Moves” is arguably the best of the other material.

A short set gets a short encore. “Lost In Hollywood” takes us back to the first half of the evening, and more than that brings us back to the start of this review. The Band enjoy playing it and show their skills one last time.

One of the biggest names in rock for 50 years, Graham Bonnet has been lucky, as he acknowledges himself. What can’t be argued is that whilst he has been involved in some of the most famous rock songs of the last generation, he is a wonderful talent spotter himself. The songs in the first half are excellent for nostalgia, but my goodness, Graham Bonnet’s Band are the stars of his show. And you suspect he rather enjoys that.