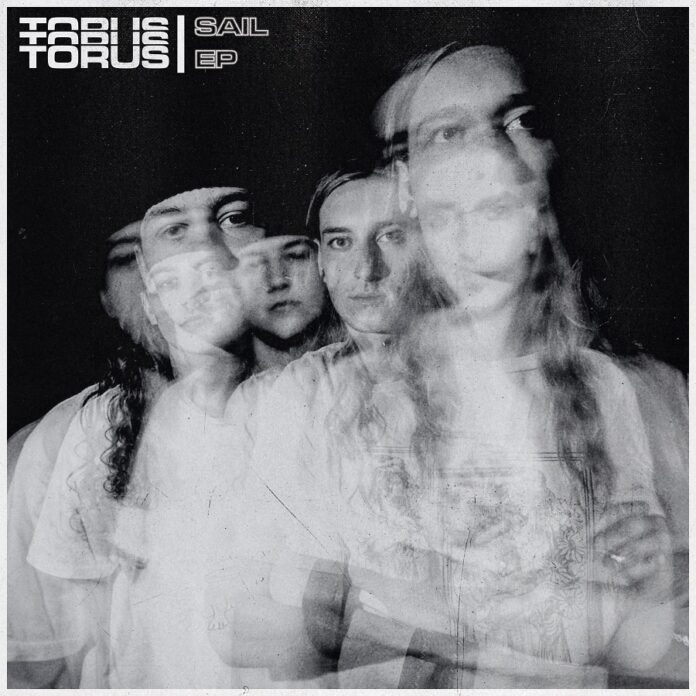 When the PR people handling a record simply email you an EP and it says “turn this up to 11”, or when you read the band themselves saying “These are seriously catchy songs. It’s loud riff rock!” You can be forgiven for thinking you know what’s coming.

Not with Torus you don’t.

Now, the thing is that they are a two piece. I am yet to see a two-piece, whether it’s the arena dwellers like Royal Blood, or the consciously underground ones like The Picturebooks, where it all sounds….well….normal.

And there’s a bit of that on “Sail”, because they might sound like everything, but they are also nothing else all at once. The title track here begins with Harry Quinn (a sort of one man rhythm section) thundering, and Alfie Glass, (who formed this band) adding something gargantuan over the top.

The hooks get to you. As promised. The opener repeats “You won’t stop lying” and before you know it, there you are too. Joining in with them, part of the outsider crowd, if you like.

Not that you can really pin them down. “Riff rock” and all that, but this isn’t Clutch. These aren’t a band that blokes of a certain age are going to stroke their beards over. No. Rather this is a young outfit with energy and skill. “Did It Again” sees Alfie offer up a kind of falsetto and the abrupt ending almost underlines they’ll do this on their own terms or not at all.

The groove of “Clone” is the most impressive one amongst a clutch of them. This is a slab of music, but its one with a melody. That’s true of all the four on offer.

The last of the quartet is perhaps the best. “Hurt You”. Typical of the album in that it sounds like none of the others, but yet is part of a coherent thread, “they only want you once they’ve hurt you” sings Alfie. Who “they” are is unclear, but so dark is the underbelly, its perhaps best not to enquire.

On that aforementioned stuff we got sent before “Sail” came out, there was a couple of sentences that caught my eye. “It’s really important to us that we always sound like Torus, and that it becomes a sound that people know,” Harry avows. “They’ll hear a song and go, ‘Yeah, that’s Torus.’ That’s what it’s all about. We’ve got lots of plans and it all feels really exciting.”

It is, people will know this band. Those aims, they’ve done that. And more, here. The name we kept coming back to again and again listening to this (and there are the odd sonic similarities) is Puppy. A band that sounds fresh and familiar at the same time is hard to find – and I imagine harder to be – Torus’s first voyage is a cruise though something special.