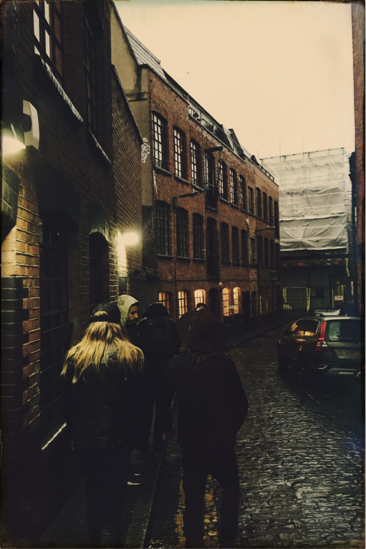 TC3 film their new one in London

Filmed a few weeks ago in the familiar urban-scapes of London during their successful Night Life Religion Tour, The Cadillac Three now reveal the final portrait of ‘Graffiti’ a brand new music video for their latest UK single. The track lays a template for their forthcoming album later this year.

“We have had such a warm welcome from our fans in the UK and with the Night Life Religion Tour, we thought it would be really cool to film the video in London with all of the unique street art everywhere,” said TC3 drummer Neil Mason, who wrote ‘Graffiti’ with Nashville songwriters Corey Crowder and Luke Dick.

Scenes capture The Cadillac Three following a masked street artist through the capital’s back-streets in Brick Lane, South Bank and Shoreditch, as the band’s lyrics and logo are tagged on every available surface before taking refuge in a dimly lit East London dive bar. Director Lyle Lindgren conceptualized the literal and unique video.

‘Graffiti’ is a soulful epic that takes the finest of the band’s Southern roots and seamlessly blends them with a contemporary feel. Available now via http://smarturl.it/TC3Graffiti, the track exhibits TC3’s trademark sound – distinctive and contagious.

The lyrics are full of nostalgia for the band who met in high school: “We’re doing it our way, leaving our mark down the halls, on the walls in the bathroom stalls, underneath that freight train bridge we jumped off // Our story spread around, word of mouth, town to town // We were small-town famous, our names in graffiti.”

Fresh from their recent sold-out headline shows around the UK, including London’s Electric Ballroom, The Cadillac Three have also just been announced to play at this year’s Ramblin’ Man Fair on 23 & 24 July 2016 at Mote Park, Maidstone.

Masters in blending the swagger of southern rock with the true grit of country, The Cadillac Three were named the 2014 UK Classic Rock Roll of Honour: Best New Band, and became the most played new band on Planet Rock in 2015 with several radio singles – ‘The South’, ‘Back It Up’, ‘Party Like You’, ‘Peace Love and Dixie’ and ‘White Lightning’ – all playlisted.

During a frequent visit to the UK late last year, The Cadillac Three was invited by Sofar Sounds to play at one of their secret, intimate gigs. The session included a performance of their hit single ‘White Lightning,’ a staple on the BBC Radio 2 playlist all summer long.

The raucous Nashville trio has found a welcome home here in the UK with their vibrant shows eliciting word-of-mouth appeal from British fans that has ensured bigger crowds – with last month’s tour being no exception – across the country at a phenomenal rate. Grammy-nominated, chart-topping frontman Jaren Johnston, whose gritty vocals wrap around the pulsating beats from musical comrades Mason and Kelby Ray (lap steel), just picked up an ACM Award nomination in the US for Song of the Year (‘Raise ‘Em Up’ – Keith Urban Featuring Eric Church) during the April 3 live show in Las Vegas.