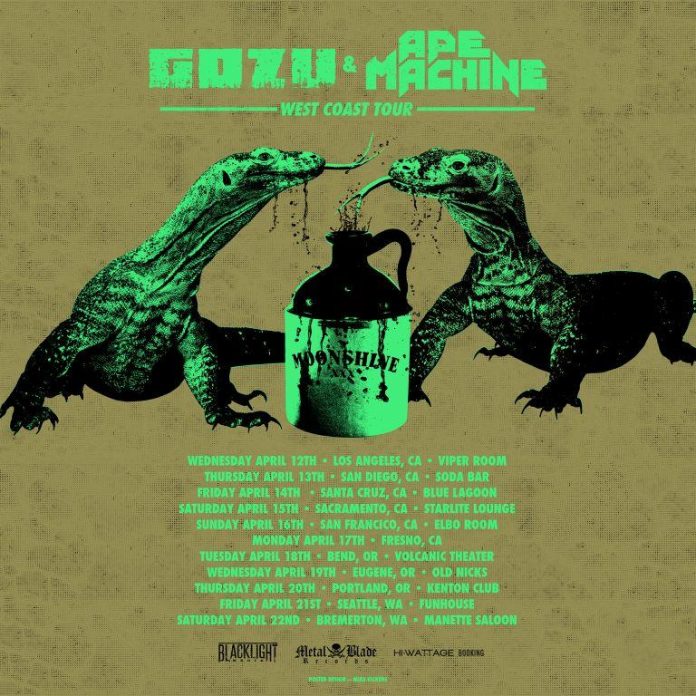 Massachusetts-based rock/metal outfit Gozu has announced a short run of tour dates next week, which will see the band perform in Philadelphia (PA), Brooklyn (NY), Dover (NH), and Portland (ME). Following this northeast trek, Gozu will appear on the west coast in April alongside Ape Machine.

Formed in 2010, Gozu has released one EP and three full-lengths to-date, and are currently writing their fourth studio album, set for a 2017 release via Blacklight Media / Metal Blade Records. Fronted by Marc Gaffney on vocals and guitar, Doug Sherman on guitar, Joe Grotto on bass, and Mike Hubbard on drums, the band’s sound is tailor-made for blasting out the car speakers via international radio airwaves. Having already been aired on national television (USA) via MTV (‘Road Rules’, ‘Dudesons’, ‘Real World’), NBC, and NASCAR, Gozu aims to take their critical and commercial success to new heights on their upcoming debut for Blacklight Media / Metal Blade Records, with worldwide touring to follow. Previously, the group shared the stage with the likes of St. Vitus, Pallbearer, Lo Pan, Storm of Light, Helmet, Elder, Mos Generator, and Fu Manchu in the States, as well as Yob, Church of Misery and Kvelertak in Europe at Roadburn (Netherlands) and DesertFest Berlin (Germany). 2017 will surely see Gozuback on the road again, and at the forefront of the heavy rock and metal world.