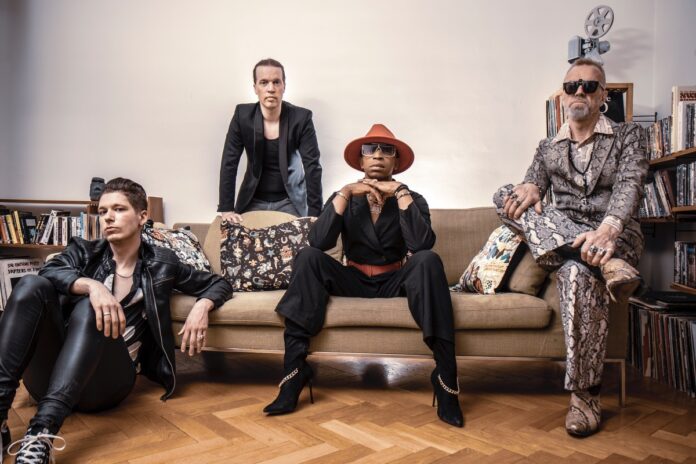 Hot on the heels of their second album, ‘Suburbia’ (released in September), eclectic Swedish rockers Fans Of The Dark have announced the release of a new EP entitled ‘Cover Me’, which contains their take on songs by Balance, Blue Öyster Cult, REO Speedwagon and Rush, all of whom have influenced their sound and style. Out on 9th December, a single and video for ‘In For The Count’ (originally by Balance) is available now.

As with ‘Suburbia’, drummer/songwriter Freddie Allen and vocalist Alex Falk are again joined by guitarist Oscar Bromvall and bassist Rickard Gramfors, with the musical prowess of the quartet perfectly suited to tackle four songs that were chosen specifically because of their connections to the overall theme of their new album; the world where the band grew up and first felt a connection with hard rock music via horror films on VHS, ’80s teen culture and everything else that shaped them – the suburbs. And also because, quite simply, the band love these songs.

‘Cover Me’ is co-produced and mixed by Lars Fredrik Swahn (Dungen, The Amazing), with Allen also co-producing.

Fans Of The Dark were formed in 2020 by Allen and Falk, who had attended school together in Stockholm and later reconnected with a shared vision of creating a band that could mix classic and melodic rock with elements of the best metal of the ’80s. Their output over the course of two albums to date has been unique and exciting, showcasing tight, inventive music and outstanding vocals.

includes the single
IN FOR THE COUNT
video
youtu.be/KxUIBt1sLkw