GOGOL WITH THE FLOE 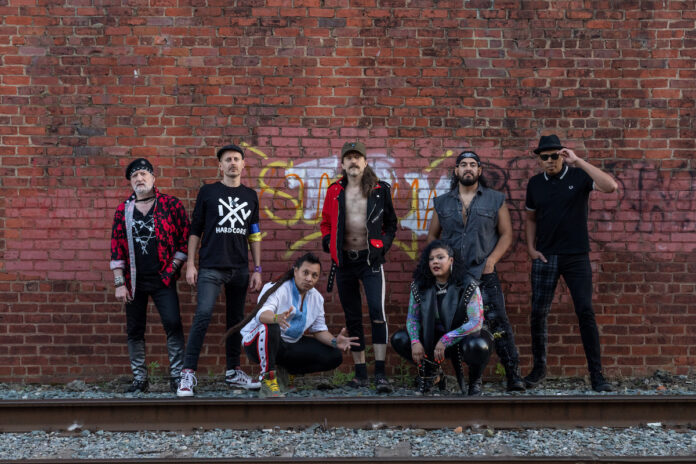 Following a secret show in occupied territory in Ukraine, and a raucous and exuberant set a Chicago’s Riot Fest last weekend, Gypsy-punks GOGOL BORDELLO are delighted to reveal the video for their new single ‘Fire On Ice Floe’ which is out now on all good DSPs.

In a performance characterised by the Chicago Sun-Times as “bonkers”, the seven-piece multicultural band led the audience into a breakneck hardcore set with selections from their critically-hailed new albumSOLIDARITINE and their full eight album catalogue, including a frenetic cover of Agnostic Front‘s ‘Victim in Pain’ and were also accompanied onstage by the Hromovytsia Ukrainian Dance Ensemble of Chicago.

“This time at Riot Fest was particularly potent because we are connected with the organisers and the dancers not only through Ukrainian origins but also through punk rock,” said Gogol mastermind Eugene Hutz, referring to the element of Ukrainian awareness that they brought. “To join forces with organisers of Riot Fest and Hromovitzya Ukrainian Dance Ensemble was meaningful and symbolic in many ways which gives us chance to deliver Ukrainian story authentically with huge reach.”

Commenting on new single ‘Fire On Ice Floe’, Eugene describes the track as the “closet case philosopher, tackling the riddles of our lives on the dance floor.”

A mix of punk, ska, and Eastern European rhythms into a lively and potent mix, ‘Fire on Ice Floe’ captures the band’s seamless ability to transcend genres with footage filmed during their European tour earlier this year.

US tour dates are on sale now, with further UK live dates TBA.

New album SOLIDARITINE is out now via Casa Gogol/Cooking Vinyl

The album can be pre-ordered here: https://GogolBordello.lnk.to/SolidaritinePR