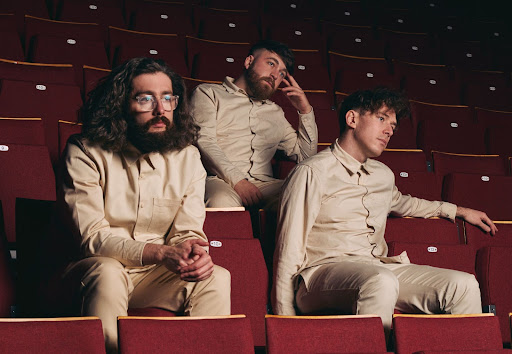 Glaswegian three-piece FATHERSON have shared a poignant new live session video for a new song titled “Honest To God“. The track comes on the heels of the announcement of their first album in three years, “Normal Fears” and a full UK tour this coming March.

Back, but not as you know them, “Normal Fears” is a lush lesson in letting go. Gorgeous, groove-led singalongs steeped in electronics find the band in a playful mode, putting break-ups, old ways of working and everyday worries behind them to start afresh, sunny side up.

“Honest To God” is central to the new album, it’s themes, and the band’s move into a new musical direction; it’s a beautiful, bare piano ballad about a dark spell in 2019 when Fatherson struggled to see their future direction. The accompanying live session sees frontman Ross Leighton give a highly emotive and intimate performance of the track, showcasing forlorn piano lines and a truly powerful vocal performance.

Speaking on the single, Leighton says, “Honest To God is about one of the least confident times in my life, and feeling like a total failure. It’s about that crippling loss of confidence spinning yourself out into a really dark place. Thinking the worst in every situation and not being able to believe in yourself. I spent a long time trying to redefine what music meant to me and how, if ever, I was going to get the spark back. It took a long time to finish, unpacking everything that it is about really took it out of me. I wrote the chorus with my friend Joe from Amber Run over zoom and the verses over about 2 months myself. It had to say just enough and no more, I love that about it. It took a while to distil but as a result it is one of the songs on the album I’m most proud of and one of my favourite songs I’ve ever written.”

Alongside their new material, Fatherson also announced details of a new headline UK tour for March 2022 in support of “Normal Fears”. The dates will follow their recent October tour which saw them play to multiple sold-out crowds. The band are renowned for their encapsulating live performances, which have seen them tour alongside the likes of Lewis Capaldi on his EU arena dates and at Wembley Arena, as well as playing with Frightened Rabbit, Biffy Clyro, Idlewild, Augustines, Enter Shikari, Amber Run, Twin Atlantic, and more.