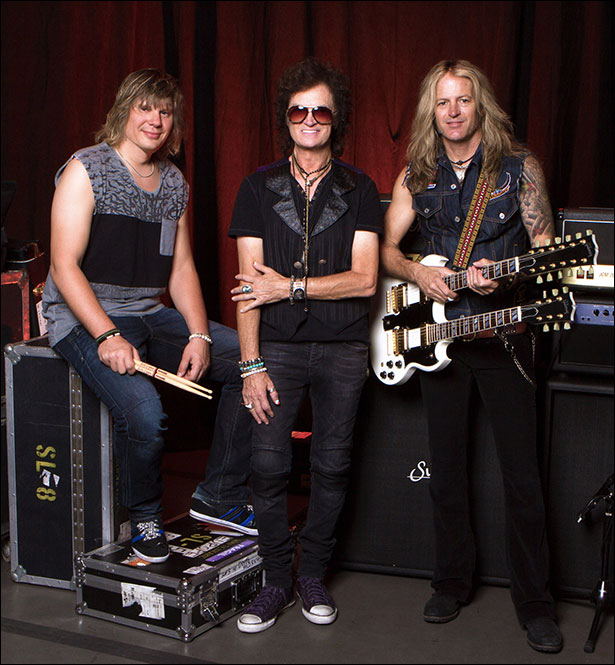 GLENN HUGHES, nicknamed the ‘Voice of Rock’, has today unveiled an official photo of his new band that he has put together for his European and UK 2015 Solo tour.  Glenn is pictured alongside drummer Pontus Engborg (far left) and ex-Whitesnake guitarist Doug Aldrich (far right).   The photo is taken by Gene Kirkland.

The band’s UK leg of the European tour stars on October 17th at the Southampton Engine Rooms and ends at London’s Electric Ballroom on November 1st.   Special guest on the tour is Jared James Nichols who recently released his critically acclaimed debut album Old Glory & The Wild Revival.

The concerts will showcase highlights from Glenn’s career including Trapeze, Deep Purple, Black Country Communion, California Breed, along with his solo material.

“I felt it was time for me to start touring with my solo band,” says Glenn, who is currently on tour in Brazil.  “I called my drummer Pontus Engborg , and guitar player Soren Andersen.  Soren had made a contractual commitment to do an autumn Tour in Scandinavia, so I had to find a replacement.

There was only one man on my mind… Doug Aldrich.”

“I’ve  known Doug from his time with Ronnie Dio , and of course Whitesnake. Doug played with me on a couple of Purple songs at a festival the night before Ronnie passed away. We had great chemistry , and talked about playing together again, when schedules permitted.

Continues Hughes, “ Doug is a welcome addition to my Band, and is a dear friend , both loving and nurturing , and is a rock phenomenon.  I’m beyond grateful to return to a Solo Band touring cycle, that will see me travel across many continents these next 12 months.See you down the front.”

Glenn Hughes is a true original.  No other rock musician has carved such a distinctive style blending the finest elements of hard rock, soul and funk.  That astonishing voice is Hughes’ calling card.  He’s known as a singer’s singer. Stevie Wonder once called Hughes his favorite white singer.  “I love my fans, and interact with them online, or at venues on my travels,” says Hughes. “There is no greater high than performing and to reach out to my fans.”