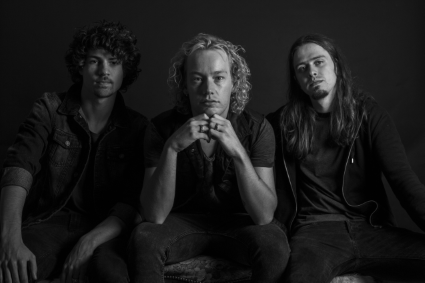 Black-Bone, who are all still in their early 20’s, have already played more than 220 live shows, including support slots with Deep Purple, Megadeth, Saxon, Slash, Status Quo and Chickenfoot, plus various Dutch festival appearances. ‘Blessing In Disguise’ was produced by Peter Van Elderen, (guitarist and front man in Peter Pan Speedrock), who deftly succeeded in harnessing the energy of Black-Bone’s visceral live performances, as well as their superb musical mastery.

Black-bone guitarist / vocalist Steef Van Den Bogaard and drummer Jules Eck, who went to school together, met bassist Sven Hompes in 2008, all three sharing a love of Guns ‘N’ Roses, AC/DC and Motorhead. Initially concentrating on covering these bands’ songs, they soon turned to original compositions and their own style began to develop. “We didn’t want to be compared with others but do our own thing,” Jules explains. The trio then missed no opportunity to play as many clubs as possible in and around Eindhoven, before meeting Rob Trommelen of Mojo Concerts during a gig at the Paradiso in Amsterdam. He liked what Black-Bone were doing, and offered them the opening slot for Deep Purple in December 2011. “That show opened a lot of doors for us,” recalls Jules. 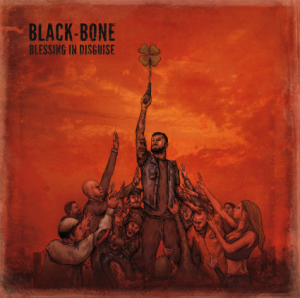 ‘Back To Mayhem’, the band’s debut album, released in 2012, was awarded 8.5/10 by Raymond Westland on thisisnotascene.com, who raved “Black-Bones’ main strength is their collective ability to write kick ass songs with memorable hooks and choruses. Vocalist Steef has this Lemmy-meets-Bon Scott going on and his bluesy guitar play has Slash all written over it. The rhythm-section, consisting of Sven (bass/backing vocals) and Jules (drums) make sure that everything is tight and groovy in the low-end sector. The band’s catch phrase is “no bullshit rock and roll” and that’s exactly what ‘Back To Mayhem’ is all about. Memorable songs brought with boundless energy and tons of attitude is at the heart of it all. Riveting stuff!”

‘Blessing In Disguise’, effortlessly picks up from where ‘Back To Mayhem’ left off, leaping a level higher, both production and song-wise. “Although we see ourselves simply as a rock’n’roll band, our music is multi-layered and very dynamic,” muses Sven, continuing, “and with the support of Peter van Elderen, we’ve succeeded in transferring the great energy of our live shows to the studio.” Packed with earthy, modern soon-to-be-proclaimed hard rock anthems such as ‘Nothing But History’ (the first single release), ‘Loaded-Weighted’, ‘Never Too Loud’ or ‘You Gotta Nerve’, ‘Blessing In Disguise’, is an incredibly accomplished, unexpectedly sublime, adrenaline infused musical gem.