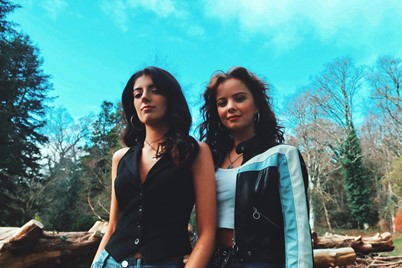 One of Ireland’s finest new bands, Belfast duo Dea Matrona, meaning “divine mother goddess” in celtic mythology, have shared their brand new single and video ‘Glory, Glory ( I am free )’ today. Produced by the band and mixed by Mike Horner (Hot Chip, Deaf Havana), the melodic and soft-rock tinged ballad comes ahead of a Nationwide Irish Tour and UK & European festival appearances, including The Great Escape in May 2022.

Filled with cues from the 70s classic rock era, ‘Glory, Glory ( I am free)’ pairs the duos smooth vocals against their heartland riffs, taking a more laid back and soft approach compared to their previous Debbie Harry meets Led Zeppelin, blues-tipped inspired cuts, including ‘Stamp on It’ and ‘Make You My Star’ which soared to No.1 on both the Irish and UK iTunes Rock Chart last year.

Written on a cold winter’s day, the inspiration for the track came from watching the festive classic ‘It’s a Wonderful Life’, and the lyrics deftly mirror the film’s narrative of a spiritual journey to their own experience of searching for answers during a time of uncertainty. The band write:

“Glory Glory (I am Free) was written during lockdown and is about making sacrifices for the people we love. Being separated from those close to you only makes you realise how badly you would do anything to be able to spend time with them.

We wrote it in the back of a car on a winter’s day. After having recently watched It’s a Wonderful Life, I feel that the film influenced the lyrics in a beautiful way as we were inspired by the idea of a spiritual experience. For me this song is about searching for answers in such strange and uncertain times”

Glory, Glory ( I am free ) is available now, with the vinyl variant of the single available to pre-order here. The 12” and double B side vinyl release includes two further tracks ‘Homeward Bound (Simon & Garfunkel cover)’ and ‘Won’t Feel Like This Forever’, alongside the first issue of their own biographical comic book series, designed by Ukraine-based artist mae_ko3.

The band’s latest offering is packed with the genuine knack for rock music that comes from two best friends who grew up busking to their favourite rock ‘n’ roll anthems on the streets of Belfast, reaching an online community of 200,000 followers and a total of over 6.9 million views on YouTube. Through this the band have honed their astonishing live skills, taking their live energy to a national tour,  Reading & Leeds Festival, as well as to support the likes of iDKHOW, Gerry Cinnamon, Van Morrison and more.

Dea Matrona was formed in Belfast by school friends Mollie McGinn (22) and Orlaith Forsythe (21). The band developed their electrifying act by harnessing the energy of classic rock legends like Cream, Led Zeppelin, Joan Jett and Fleetwood Mac, as well as a contemporary flair from influences like Tame Impala and Royal Blood. With their hard hitting riffs and musical intensity they have established a rare, sensational sound – gritty and real but loaded with melody and style.