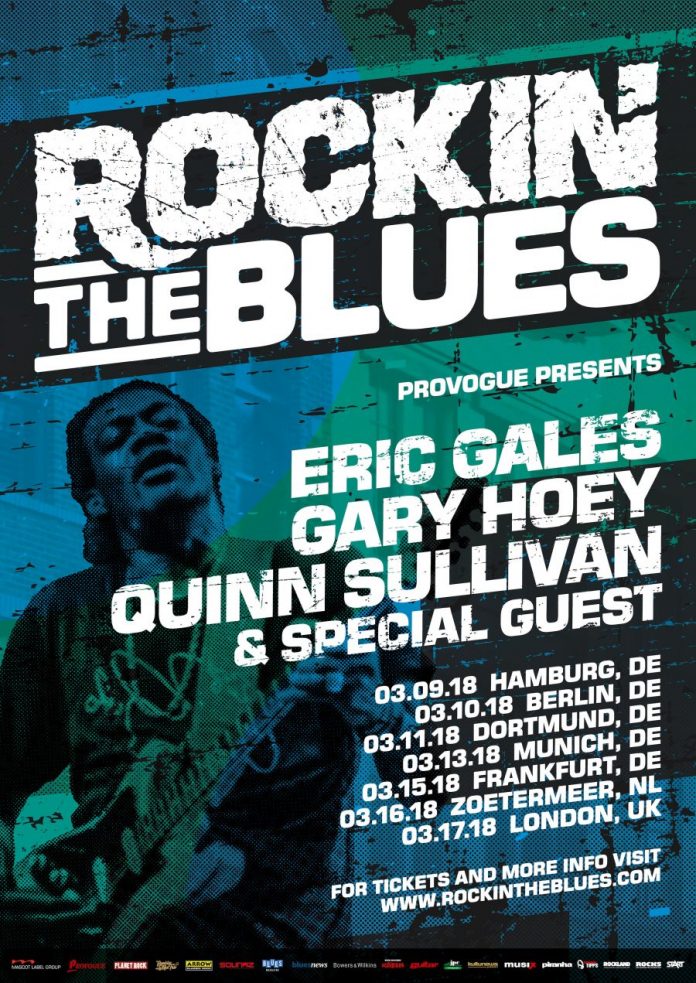 The Mascot Label Group is home to some of the worlds’ finest modern Blues artists and the Label are thrilled to announce their first Rockin’ The Blues 2018 Tour featuring the exceptional talents of Eric Gales, Quinn Sullivan and Gary Hoey for a triple guitar hero extravaganza.

The tour will be calling through Germany, The Netherlands and the UK and will see each artist headline on the revolving line up with them all coming together for a final jam. It will also give the audience the chance to get up close and personal to meet the artists, to get their personal items signed, and also take part in a guitar clinic where fans will get the opportunity to ask the artists for tips, techniques and what makes them tick.

Talking about the idea and setting up the festival the Mascot Label Group CEO Ed van Zijl remarks; “A label festival has been in the back of my mind for a few years. Now it is finally happening and March 2018 will see the first edition of the Rockin’ The Blues festival. Seven shows in three countries! It is our intention to extend the festival each year with more shows and adding countries. Besides going out and meeting our audience, this festival is also important to us to use as a springboard to bring new talent to the fore, in 2018 this will be Quinn Sullivan.”

Guitar whirlwind Eric Gales will be hitting the road for Rockin’ The Blues following his critically acclaimed new album ‘Middle of the Road’ which was released early 2017, Eric Gales is a man on form and on fire right now. His fourth album on Provogue/Mascot Label Group (15th album in total) sees him at his most expressive yet; it is a deeply personal and reflective record that echoes where he is in his life right now and he allows himself to open up and really  flourish, right here and right now is the rebirth of Eric Gales.

The who’s who of guitarist are declaring their admiration for him; Dave Navarro (Jane’s Addiction/Red Hot Chili Peppers) exclaimed that “How Eric Gales isn’t the hugest name in rock guitar is a total mystery”, modern blues icon Joe Bonamassa said he is “One of the best, if not the best guitar player in the world”, whilst Mark Tremonti (Alter Bridge) said ‘this guy could be the best player on Earth” not to mention admirers in the shape of Carlos Santana, Tosin Abasi (Animals As Leaders) and Tony Rombolo (Godsmack).

18 year old guitar prodigy and Buddy Guy protégé Quinn Sullivan has been a music professional for more than 75 percent of his life. He’s shared the stage with Buddy Guy aged eight, Eric Clapton, Los Lobos, The Roots, Derek Trucks & Susan Tedeschi and Joe Bonamassa, and he opened for B.B. King, who later invited him to play his treasured “Lucille” guitar. He has performed on concert and festival dates throughout the United States – including at storied venues like Hollywood Bowl, RFK Stadium and Madison Square Garden. He’s also appeared on national TV, with guest appearances onThe Tonight Show with Jay Leno, Oprah, Late Night with Jimmy Fallon, Conan with Jeff Bridgesand twice on The Ellen DeGeneres show aged six and fourteen .

Sullivan has packed some extraordinary experience into his decade-long career, His third studio album,‘Midnight Highway’ , was produced by multi GRAMMY® winner Tom Hambridge (Buddy Guy, Susan Tedeschi, Johnny Winter) – was released back in March on Provogue/Mascot Label Group to universal plaudits, including the legend Buddy Guy himself proclaiming, “players like Quinn come along once in a lifetime.”

It’s just so right-with-the-universe that Gary Hoey’s 20th album, ‘Dust & Bones‘ is an exuberant fusion of blues and rock. After all, this accomplished and diverse guitarist has explored several styles in his career—hard rock, rock, surf, and prog, to name a few. Released in July 2016 on Provogue/Mascot Label Group it saw Hoey forge his deep blues and rock roots into a fiery, organic, and thrilling mix that delighted and astounded lovers of the guitar and guitar music.

In 1987, the Boston-born guitarist caught the ear of Ozzy Osbourne—no slouch at picking great guitar players—and almost ended up in his band (The gig ultimately went to Zakk Wylde.) Hoey scored a major-label record deal where his version of Focus’ “Hocus Pocus” brought Hoey huge success. On the release of ‘Dust & Bones’ Classic Rock Magazine gushed calling it “a smouldering, steel-eyed work of electric blues and 21st century guitar-hero rock.”

Rockin’ The Blues is an opportunity to see the finest players of their generation in one place at one time and get up close and personal with them and giving the fans the chance to interact and find out what makes them tick. The Blues is calling…