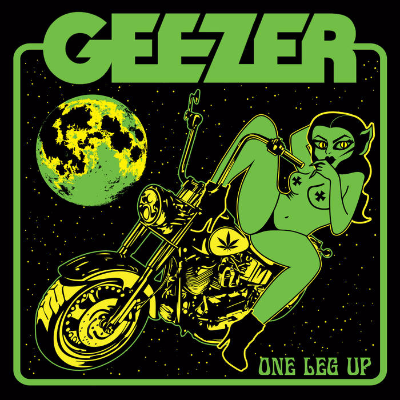 And they know how to use them

“It’s about the kind of woman you can’t be around because the temptation is too great. You know you shouldn’t, but you know you could… ”

So says Pat Harrington of the new lead-off single, “One Leg Up” off the upcoming self-titled album from Geezer, due out this November on Ripple Music (CD and Digital) and STB Records (vinyl).

“It’s one driving groove, all the way through,’ says Harrington “Simple. Rock. Riffs. Although it wasn’t the original intent, the song ended up being kind of an homage to The Stooges. It’s our take on those great songs like “Loose” or “TV Eye”. The lyrics are also greatly influenced by the man himself. I just thought to myself, “What would Iggy do?”. Sing about women, cavemen and dogs… primal instincts, temptation, decadence. It’s been a staple of our live show for over a year now and it always gets the crowd moving.”

Geezer is launching the follow up to their long-sold-out debut album, Gage, which was also simultaneously released on Ripple Music (CD/Digital) and STB Records (vinyl). That album broke the band to a larger audience who appreciated their heavy, greasy, bluesy vibe.  The new album takes that core Geezer sound and expands upon those ideals for another rough and ready blast of pure fuzzed out stoner, blues bliss.

And to kick off the new album, Geezer and Ripple Music are making the lead off single available as a free download for all comers, old and new, to welcome you to the Geezer clan.   “One Leg Up,” can be found for free download on the Ripple Music Bandcamp page,  And dig that crazy artwork by Kim Zangrando.

And keep your dilated pupils open for the full-length release, coming this November on Ripple Music and STB Records.