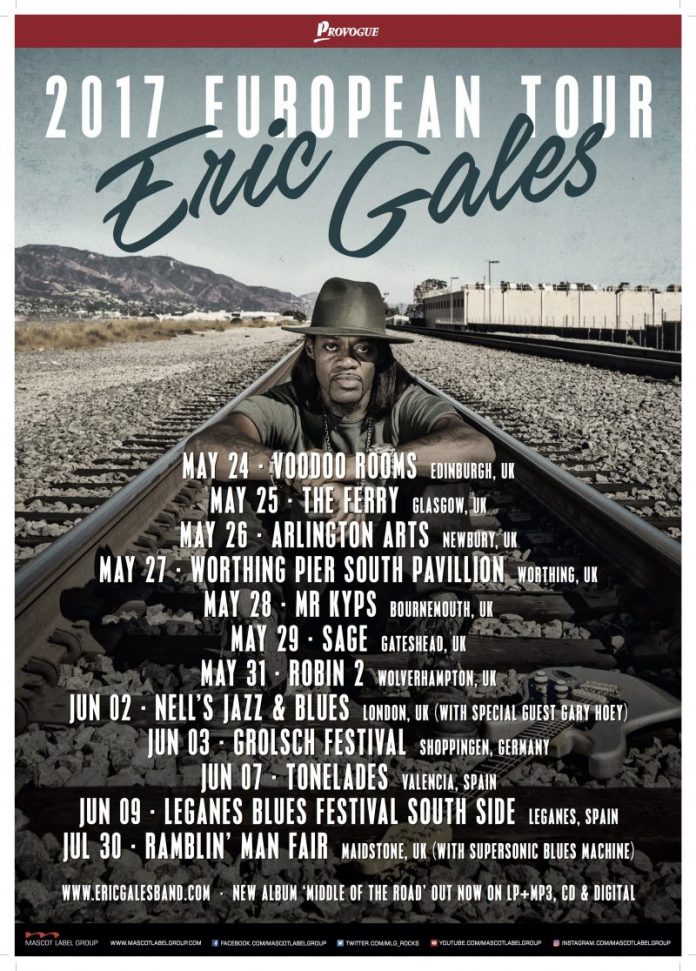 Following the release of his incredible new album Middle of the Road, guitar whirlwind Eric Gales will be returning to the UK for an 8 date tour in May calling at Edinburgh, Glasgow, Newbury, Worthing, Bournemouth, Gateshead, Wolverhampton and London as well as festivals at Grolsch Festival Germany, Tonelades and Leganes Blues Festival Spain ahead of his performance at the Ramblin’ Man Fair as part of Supersonic Blues Machine in Maidstone, UK.

Itching to get back on the road and over to Europe Eric adds; “I am finally happy to announce the upcoming UK tour coming the end of May through June. Wow are we excited to be touring in the UK. This is gonna be amazing. Get ready over there because we’re coming!”

His latest album Middle of the Road was released on 24 February and received rave reviews fromClassic Rock, Powerplay, Fireworks, Blues Matters, Blues in Britain, Total Guitar, Guitar & Bass andGuitarist magazine amongst others and was called “scorching”, “rocket-fuelled”  and he was declared as “one of the greatest guitarists on the planet” not to mention counting fans in the shape of Dave Navarro, Carlos Santana, Mark Tremonti and Joe Bonamassa.

Middle of the Road is Eric Gales fourth album on Provogue/Mascot label Group (Joe Bonamassa, Beth Hart, Black Stone Cherry, Warren Haynes, The Robert Cray Band, Robben Ford, Eric Johnson, The Kenny Wayne Shepherd Band) and it sees him at his most expressive yet; it is a deeply personal and reflective record that echoes where he is in his life right now and he opens himself up and allows himself the chance to really flourish. “I feel the most free I’ve ever been in life, even more so than when I was a kid…you gotta help yourself man, once you can help yourself you can genuinely help someone else” he opens up about the album.

It’s well documented that Gales was a child prodigy and heralded as the second coming of Jimi Hendrix when he released his debut album The Eric Gales Band in 1991 as a 16 year old on Elektra Records. It was the first of 10 albums on a major label through a blistering career. He has released 14 studio albums in total ahead of Middle of the Road and a host of other collaborations, one of which led him to work with producer Fabrizio Grossi (Alice Cooper, Joe Bonamassa, Billy F. Gibbons, Ice T, Leslie West, Slash, Walter Trout, Steve Lukather, Steve Vai, Paul Stanley, Supersonic Blues Machine).

In 2009 he spent time in the Shelby County Correction Center for possession of drugs and a weapon. Elaborating he adds; “While I was in there all the officers and guards were like, ‘bro you know this isn’t where you’re supposed to be. When you get out of here, go take the world by the horns and ride it all the way out.’ It took a couple of years after but, I’m here.” Whilst he was incarcerated he was able to play shows, for the Mayor, the city and festivals, his own version of Johnny Cash Walk the Line.

Middle of the Road has seen Eric Gales reborn and this upcoming tour is going to be an unmissable opportunity to see one of the greatest guitarist in the world up close and personal.

“When I say the world will hear about it, you’ll see what I mean when you hear the record,” he says. “This record is going to take me everywhere that I’ve never been, and everywhere I’ve ever wanted to go.” Eric Gales