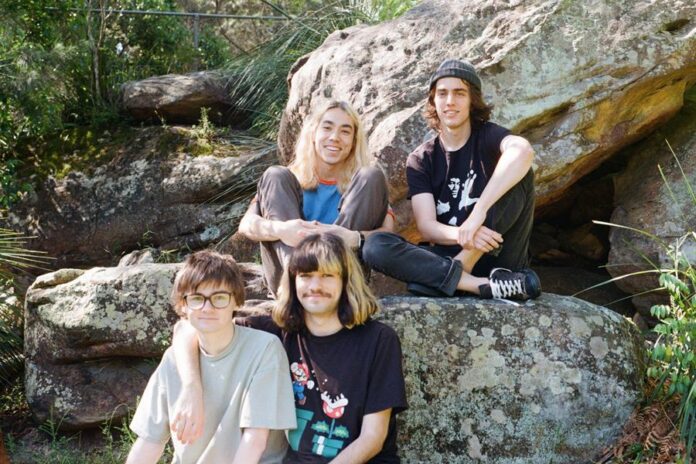 Today, soaring Australian psych-rock outfit The Lazy Eyes have returned, with the news of their debut album Songbook, a tour support with The Strokes next year, and the release of their latest cut ‘Fuzz Jam‘.

The act of improvisation has come to be part and parcel with The Lazy Eyes, established through their cult live following, and ‘Fuzz Jam‘ is no different. The group channel the prolific with their latest release, kicking off with a propulsive, looping bass and drum chug that slips into a wave of synths and rhythmic strut. Before one can catch and follow the beat, it mutates into a muscular sludgy jam and then further again into wonderful disarray. “I wrote ‘Fuzz Jam’ to use this instrument that Itay bought live,”Harvey recalls. “It’s this Hohner Pianet T, and we really wanted a harder track to play on it.”

‘Fuzz Jam‘ is The Lazy Eyes at the height of their powers, without compromising that feeling of stumbling upon that viral footage of ‘Half Full Glass Of Wine’ and wishing you had witnessed a band destined for stadium glory. These are the sights The Lazy Eyes set with their debut album, Songbook, a world unto itself. Including a collection of the best The Lazy Eyes songs written over the course of their first five years of infancy but like every good fantasy world, it abides by its own logic. Step inside: the colours are a little brighter; things move a little slower, but they’re liable to get inordinately faster in the blink of an eye. Suddenly you’re in a garden in full blossom, and you didn’t even notice; you walked a mile without taking a single step.

SongBook is strange like that – all journey and all destination, a decidedly modern marvel of psych-rock that’s unpretentious in construction but precious where it counts. Since their undeniable breakthrough in 2020, The Lazy Eyes have become emblematic torchbearers of the next generation of Australia’s psych-rock scene, their reputation and talent spreading like word of mouth wildfire across projects, EP1 and EP2, include the hits ‘Where’s My Brain???‘ and ‘Cheesy Love Song‘. From selling out numerous East Coast shows in their home country, and the debut of their own music festival Lazyfest, acclaim has clamoured both locally and globally for the band, across Complex, KCRW, BBC 6 Music and Radio 1, SPIN, triple j Unearthed, FBi Radio and countless more, including their place in the NME 100 for 2021.

Step inside, but be warned: Once you’re in The Lazy Eyes‘ world, you might not want to leave any time soon.

‘Fuzz Jam‘ is out now, buy/stream it HERE