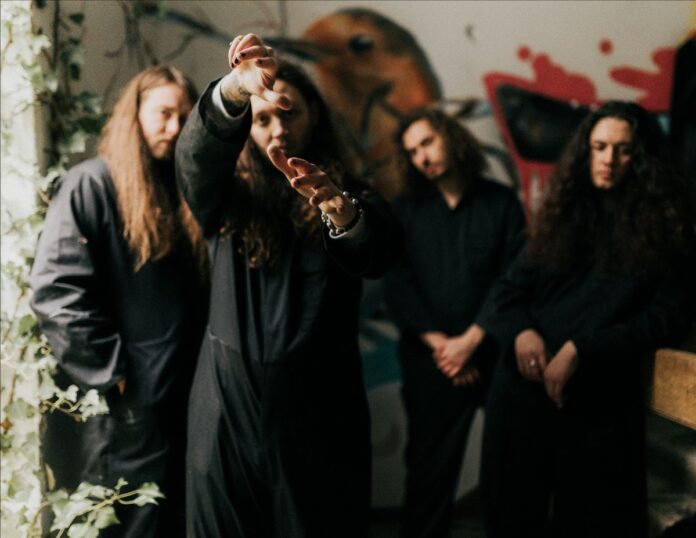 ‘Requiem’ is taken from the band’s acclaimed new EP Temple Corrupted, out now via Lockjaw Records.

In the words of the band: “‘Requiem’ was a lockdown demo started by Jamie in the wake of hearing about a family member’s health diagnosis, and when shared with the band, Zac started writing the lyrics. Inspired by Jamie’s family and Zac’s own experiences with loved ones’ health struggles, the lyrics explore the fragility of life, and how we as humans turn to ritualistic superstitions to give answers to the things we can’t comprehend, like loss and death.

“This song is a real call to arms, and we’ve already seen an emotive reaction from our fans when we play it live. It’s been a journey to see such a positive response from the song’s dark origins.”

The EP – a raucous mix of Deftones, Thrice, Black Peaks, and Phoxjaw – marks a new era for the band. It follows heavy pre-Covid touring around the UK and Europe with Black Peaks, Phoxjaw, Haggard Cat and Press to Meco, and fully showcases El Moono‘s expansive tastes and approach.

A band unafraid to experiment sonically, El Moono tracked their EP in an ancient church, and notably features the piano used during Adele‘s Glastonbury performance.

Temple Corrupted is a concept EP, focused on depression and anxiety, and how societal corruption affects individual mental health. Listen out, for example, for track five, ‘Miseria’, which directly tackles the first-person experience of self-loathing. The song brings attention to the staggering statistics around suicide, and what might happen in future if our attitudes toward mental health remain the same.

‘White Gold’ tackles issues around institutionalised segregation of race and the injustices ethnic minorities face, fronting up to how the UK is an ‘ignorant empire’. Unafraid to confront serious events, their track ‘Requiem’ was inspired by watching a loved one waste away due to illness – a direct nod to guitarist Jamie’s father’s diagnosis of chronic cancer at the beginning of the Covid-19 pandemic.

A band fully committed to their message and to change, drummer Chris runs a clothing brand, ‘Over Your Head’ donating profit portions to mental health charities.

‘White Gold’ gained the attention of legendary artist Dan Hillier, who lent his stunning artwork for the cover. El Moono are the third band Dan has worked with after fellow Brighton-based heavyweights Royal Blood and Architects.

A reflection on the fragility of life, Temple Corrupted is a fearsome and impassioned EP from a highly promising group.