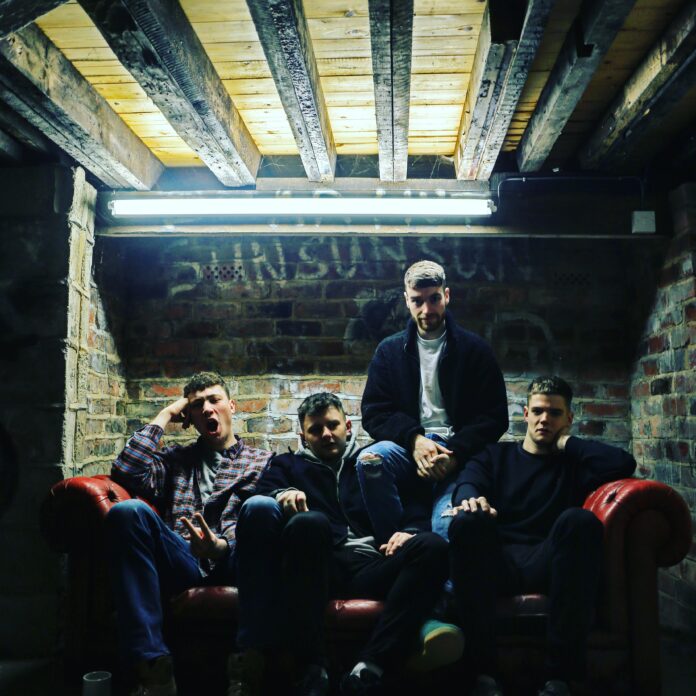 THE TOWN HALL SESSION EP is almost here and ready to bless your ear holes courtesy of FUDGE. It sees the fusion of three previously released singles and two additional ‘wobblers’ – as singer Cam eloquently puts it – Jekyll & Hide and Pepsi Noggins, to create one phat record. Recorded and mixed by Leeds’ very own Kane Whitelam and captured on camera by the great Hugh Roberts and Tim Wheeler, the EP is the culmination of talented people each making their mark on the Leeds scene in one way or another.

The EP release coincides with NOTHING BUT NOISE, the band’s first one day festival at Leeds Belgrave Music Hall on 21 May and will be followed by a UK tour with Leeds noise merchants DIM IMAGERY.

THE TOWN HALL SESSION EP goes out to all those who have helped and supported FUDGE. through their short and chaotic life so far and serves to bring more people together to experience the lifeblood that this band bring every time they play live. The record marks the end of an era. A time where things were simpler but, in retrospect, were in fact just as turbulent and impetuous as they are now. But it also marks the beginning of many things: a new age of FUDGE. which will see even phatter gigs across the country and new wobblers to boot; a new era of live music for everyone and an inevitable time of rejoicing as we move away from the shit-show that has ensued for the past two years; and the beginning of some semblance of normality, where we can be as abnormal as possible once again. The EP, therefore, should be a little – or big – celebration each time you listen to it; something to get you hyped for the future, and to say a big “fuck you” to anything that might taint that.

The band pride themselves on their live performance which, repeatedly, is eulogised by those who find themselves caught within the chaos of a FUDGE. gig. Their epic live performance has now met head on with the majestic and iconic venue in which they recorded THE TOWN HALL SESSION EP. Unfazed by the eminence of the building, the boys and the team captured their hectic performance in stark polarity to the splendour of the venue. You wouldn’t think to pair the two, but it works.

The EP coincides with the band’s biggest headline show to date at the NOTHING BUT NOISE one day festival at LEEDS BELGRAVE MUSIC HALL on 21 MAY 2022, which also includes – in alphabetical order: Allora | Dim Imagery | Flat Moon | Helle | Household Dogs | Infinite Corners. Doors at 4.30pm.